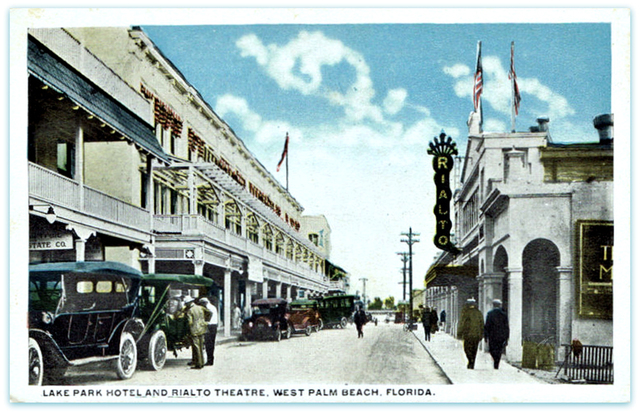 This was the first Arcade Theatre to operating in West Palm Beach. It was operating by 1915. Later renamed Strand Theatre, then Rialto Theatre.

Unless there was more than one Rialto Theatre in West Palm Beach, this house must be the one that was mentioned in an article about theater owner Carl Kettler in the Palm Beach Post of October 22, 1922:

“In 1915 he took over the Arcade Theatre and held it for one year, renaming it the Strand.

“‘In the Summer of 1916 we relinquished our rights to this theater to its original owners, Jonas & Garrison, and they in turn leased it to Alfred A. Tano, who after remodeling it renamed it the Rialto, under which name it is operate [sic] today by the Bijou-Amusu Company,’ Mr. Kettler stated.”The remodeling of the Arcade in 1916 is mentioned in the March 25 issue of The Moving Picture World:

The Arcade Theatre on Clematis Street must have been the second of that name in West Palm Beach, and built sometime after the original Arcade was renamed the Strand and then the Rialto.

From the early 1900s a postcard image of the Rialto in West Palm Beach.