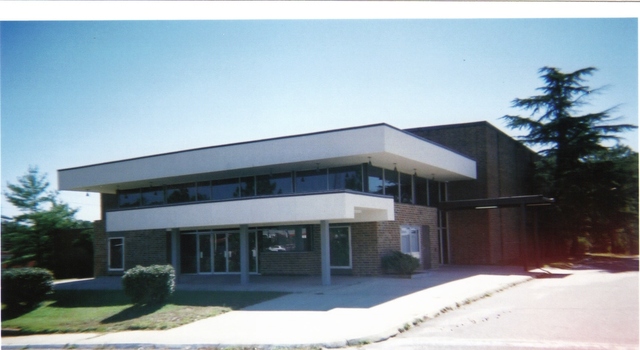 Located in the Town and Country shopping Center off U.S. Highway 1, in Southern Pines/Aberdeen. The Cinema was owned by All Star Cinemas which also owned and operated the Sandhill Cinema 10 that served the Greater Pines area and all of Moore County.

The cinema opened in 1966 as a single screen 600-seat theatre, a second 325 seat screen was later added. The theatre was closed somewhere around 2000 by Carmike Cinemas, around the same time they closed Carmike 4 that was just down the road from the two screen. All Star Cinemas bought/leased the building in 2000, and so far, Frank Theaters bought out All Star Cinemas, and all of the theatres within the company.

Open in 1966 as a 600-seat single screen theatre originally operated by Charlotte-based Stewart & Everett Theatres. By mid-1977,a newly construction 325-seat auditorium was added to the original auditorium,making it a twin cinema while it kept the original auditorium’s 600-seating capacity for the theatre’s booking of STAR WARS which came out around July or August of 1977. The theatre closed in 2007 and as of this writing it is still intact. It has shown signs of wear and tear.

I passed by this theatre the other day,which was on a Sunday to find out that the Town and Country I & II in Aberdeen/Southern Pines has been demolished as of 2011.

A TEXAS ROADHOUSE OF STEAKS RESTAURANT has been built and opened in early 2012 where the former twin cinema once stood. As of now,the Sandhills Cinema 10 on Brucewood Road is the only multiplex theatre in all of Moore County serving Southern Pines/Aberdeen.

raysson: THE TEXAS ROADHOUSE OF STEAKS RESTAURANT opened in February of 2012 where the formerly Town and Country Twin Theatres once stood that closed in 2007 and was demolished by 2011. Reason? I pass by this theatre on a road trip through Southern Pines/Aberdeen right off Highway U.S. 1/15/501 on a Sunday afternoon to find out that this theatre was demolished and a restaurant was built on the same lot where the cinema once stood.

I saw Star Wars in this theater as a kid. I’m still irrate that they tore it down. Aberdeen/Southern Pines is not the hometown it used to be. I can’t see myself ever living there again.

gunnarbiker: The Town and Country Twin got a lot of the big blockbuster hits…..I remember seeing not only “Star Wars” here but “The Empire Strikes Back”,and “Return of the Jedi” played here before capacity sold out crowds…..“Jaws” played here when it was a single screen theatre in 1975…I remember the lines that stretched from one end of the shopping center to the other. Also played here were “Superman:The Movie”, “Grease”,“Saturday Night Fever”,and “Close Encounters” first-run billing here.

Other movies that played here too from “E.T.”, “Indiana Jones”, “Back To The Future”, “Who Framed Roger Rabbit”, the original “Die Hard” movie and the original “Batman” movie got first-run billing to “Jurassic Park” and I fondly remember seeing “Jurassic Park 2:The Lost World” which played to capacity crowds on two screens in June of 1997! Such great memories of this theatre. Like you it irrates me that they demolished it and replaced it with a high price/overbilled Texas Steakhouse Restaurant where the theatre once stood. I remember seeing movies in both Southern Pines/Aberdeen and as far away as Rockingham,but I’m like you that Southern Pines/Aberdeen is not the nice hometown that it used to be. It lost it with me when they put a 10-screen multiplex on the opposite end of town closing both the Town & Country 2 and the Carmike 4 indefinitely. Just to show you that the 10-screen multiplex is basically the ONLY movie theatre in town(The Sandhills Cinema 10 is listed on the Cinema Treasures site)with high price admission and outrageous prices they charge for a bag of popcorn.

raysson – I watched Grease there and I saw Who Framed Roger Rabbit there too, amongst many, many others. I even walked out of Transylvania 6-5000 in this theatre!

I remember seeing the original Karate Kid at Carmike 4 amongst many others. I just don’t feel at “home” any more when I go visit my parents there. I grew up in Raeford/Aberdeen/Southern Pines but it’s not even close to being the town that it used to be.

I also watched the 1999 Star Wars Episode I there to a packed crowd!

FROM THE DECEMBER 15,1966 EDITION OF THE ABERDEEN-SANDHILL CITIZEN NEWSPAPER:

The new Town and Country Cinema will open tonight in its new building on Highway 1,north of Aberdeen and just south of the Howard Johnson’s restaurant. On the big 19 ½ by 44 feet screen for the first time will be “Not With My Wife You Don’t!” starring Tony Curtis, George C. Scott and Virna Lisi. The new building and equipment,an ultra-modern theatre designed for motion picture enjoyment cost approximately $225,000,according to Charles B. Trexler,president,of Charlotte. The building with bulit and is owned by Volt Gilmore and released to Stewart and Everett Theatres of the Carolinas of which Mr. Trexler is president. Town and Country Cinema makes the 71st theatre in the Stewart and Everett Theatres of which Mrs. Trexler is vice-president. Town and Country Cinema makes the 71st theatre in the Stewart and Everett theatre chain in North Carolina,South Carolina and Virginia. It has a seating capacity of 600 with 72 seats for smokers. The theatre will have four showings daily with Saturday and Sunday will have five showings with the last picture show ending at 9:00pm. The decor of the building is gold and olive. Special features of the new Cinema will be convenient parking,spacious lobby and lounge,lounge chair seating with deep foam cushions and backs scientifically designed and spaced for maximum comfort,and special smoking lounge with specialized exhaust systems for removing smoke quickly,and a hi-fidelity sound for your listening pleasure;automatic zone controlled temperature for ideal “weather” year round. The coming attractions for the grand opening of the Town and Country Cinema will be James Coburn in “Our Man Flint”,and James Coburn in “Dead Heat on A Merry-Go-Round”,and Charlton Heston in “Khartoum”

Opened on December 15,1966 under Charlotte based Stewart and Everett Theatres.

Should be read as 2 screens 925 seats demolished.