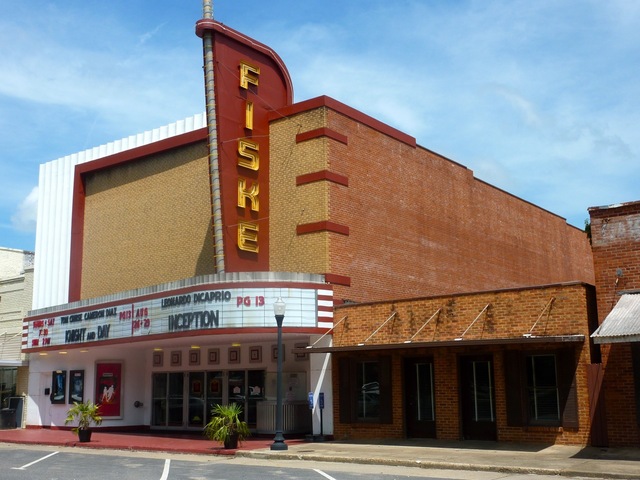 The Fiske Theatre was opened in April 1928, and at the time was one of the premier state of the art movie cinemas in northeast Louisiana.

It was owned and operated by the late Donald Fiske of Oak Grove.

The Fiske Theatre was a two level cinema with a first floor that seated 500 people and a balcony (used mainly for African- Americans during segregation) that seats 250, as well as a cry room located on the back of the first floor for mothers with small children.

The Fiske Theatre was rebuilt in 1950 to the Moderne style designs of architect B.W. Stevens. It reopened on April 17, 1950 with Larry Parks in “Jolson Sings Again”. It was operated continuously by the Fiske Family until 1987 as a first run cinema.

In 1987 as Mr. Fiske’s health began to fail him the theatre was donated to the West Carroll Chamber of Commerce where it has been used mainly for gospel music concerts and other community events since then.

The theatre is in very good condition thanks to the hard work of the chamber and numerous grants for upkeep from the Louisiana State Legislature.

After a two-month renovation period in the fall of 2008, the Fiske Theatre returned as a first run movie theatre on December 15, 2008 with a showing of “Fireproof”

The theatre is now open each weekend showing a different first run feature film each week on the biggest screen (18'x33') in Northeast Louisiana. In February 2010 the theatre was equipped with DTS Surround Sound, and in November 2011, it was equipped with digital projection equipment.

The Fiske is currently closed for renovations and will reopen in December as a second-run movie theater with the largest screen (18' x 32') in a 60-mile radius!

The Fiske Theatre has been back in operation since December 15, 2008 showing a different first-run film each week on Friday, Saturday and Sunday.

Since that time the exterior of the building has been repainted along with the concession area being renovated.

With a donation from Priemer Cinemas the Fiske is curently in the process of adding DTS surround sound that is scheduled to be put into service early in Feb. 2010.

Recent pictures can be found on wikpedia.

On November 18th The Fiske Theatre ended an 82 year love affair with 35 mm film retiring her film-projection equipment and entering the digital age becoming the first independent theatre in North Louisiana to become 100% digital. North Louisiana’s grandest lady of film is now powered by a Barco DP3000 projector with a Dolby Server/Show Store.

Grand opening articles and some history (click to zoom it) 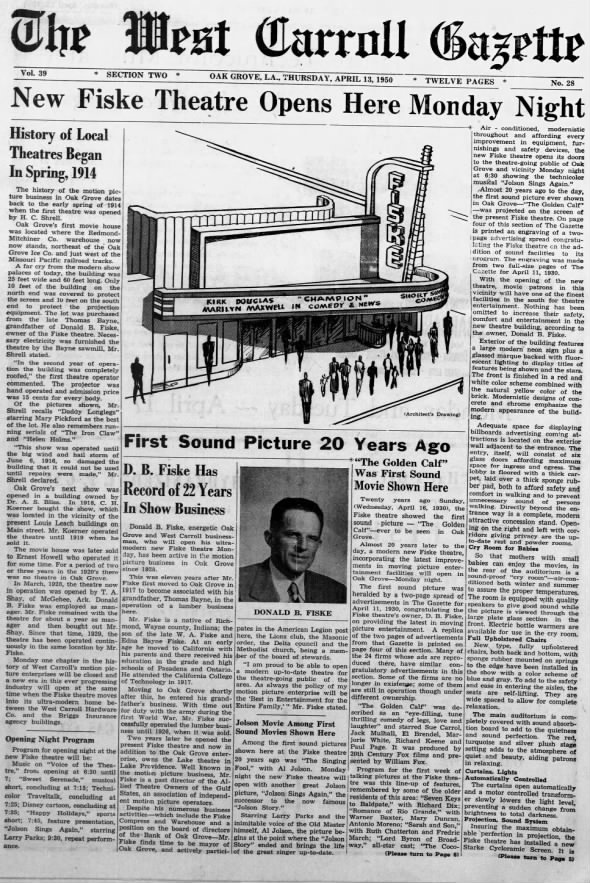 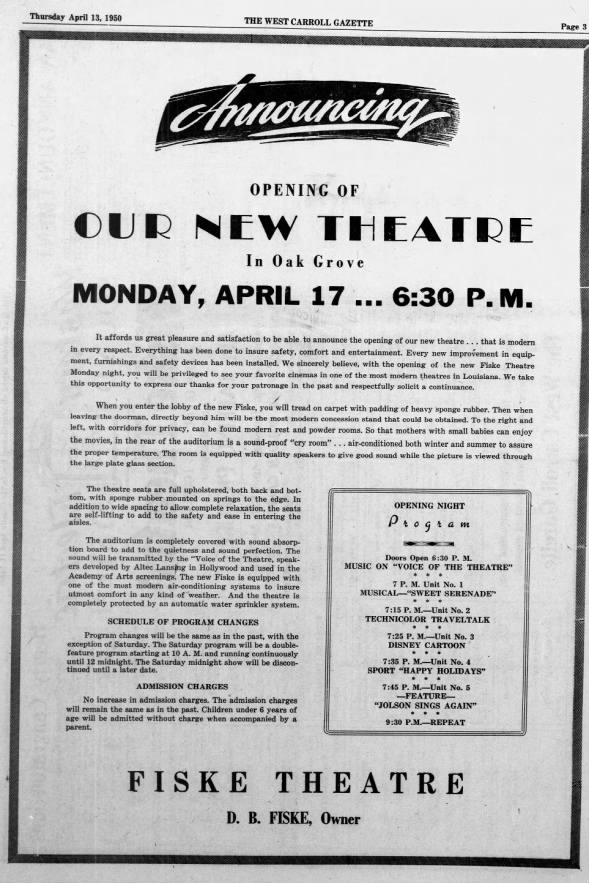 We stopped in Oak Grove so I could see this theater. The very friendly staff invited me in, and Mr. Holland (who is the mayor), showed me around. The movie was almost over, so I waited a few minutes and they let me roam around inside and take a bunch of pictures. The theater is very well cared for.