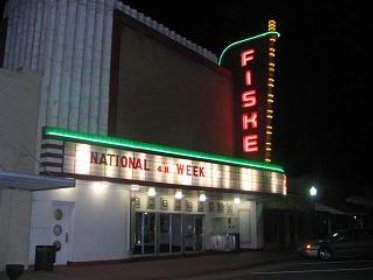 OAK GROVE, LA — The Historic Fiske Theatre will feature the moving motion picture Amazing Grace, February 15-17 as this month’s Movie of the Month.Friday and Saturday night showings beginning at 7 p.m. and the Sunday matinee is at 2 p.m. The Sunday showing will be deemed “Church Day at the Fiske” where patrons will receive free popcorn with their church bulletin.

Amazing Grace is a inspiring film directed by Michael Apted about the campaign against the slave trade in 18th century Britain, led by famous abolitionist William Wilberforce, who was responsible for steering anti-slave trade legislation through the British parliament. The title is a reference to the hymn “Amazing Grace” and the film also recounts John Newton’s writing of the hymn.

In publicity material the film is tagged “Behind the song you love is a story you will never forget."

Russ Breimeier of Christianity Today called the film Similar to Chariots of Fire and Shadowlands in tone, and said, “Amazing Grace balances faith and filmmaking in a historical drama that depicts an ordinary Christian doing extraordinary things because of his beliefs,” and Kenneth Turan of the Los Angles time said, “Amazing Grace, is a story of idealism, idealists and speaking truth to power, and understands there is something inordinately moving and dramatic about a man who stands up for what is right and makes a difference in this life."

The film was released on February 23, 2007 through IDP and Samuel Goldwyn Films,[2] coinciding with the 200th anniversary of the date the British parliament voted to ban the slave trade.

The film begins with Wilberforce severely ill and taking a holiday in Bath, Somerset, with his cousin, Henry Thornton. It is here that he is introduced to his future wife, Barbara Spooner. Although he at first resists, she convinces him to tell her about his life. The story flashes back 15 years to 1782, and William recounts the events that led him to where he is now. Beginning as an ambitious and popular MP, William was persuaded by his friend William Pitt, Thomas Clarkson, Hannah More and others to take on the dangerous issue of the British slave trade which led him to become highly unpopular in the House of Commons amongst the Members of Parliament representing vested interests of the trade in the cities of London, Bristol and Liverpool.

Exhausted, and frustrated that he was unable to change anything in the government, William becomes physically ill, which brings the story back to the present day. Having virtually given up hope, William considers leaving politics forever. Barbara convinces him to keep fighting because if he does not, no one else is capable of doing so. A few days afterward, William and Barbara marry; and William, with a renewed hope for success, picks up the fight where he had previously left off, aided by Thornton, Clarkson and James Stephen. In time, after many attempts to bring legislation forward over twenty years, he is eventually responsible for a bill being passed through Parliament in 1807, which abolishes the slave trade in the British empire forever.

Amazing Grace received the Truly Moving Picture Award in 2006, designating it as a film that can “move you to laughter, to tears, to make a difference."

Admission to the film is just $3.00 with children six and under being admitted free with a paid adult.

(Thanks to Adam Holland for providing the picture.)

adam how are .it is ming .good luck with theatre.

Any chance that you can update the listing above with some photos? Interior—auditorium, proscenium, sidewalls, booth—especially?
.