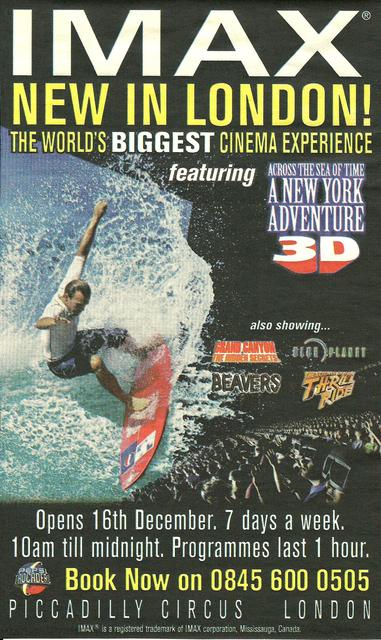 The Pepsi IMAX Theatre was located on the top floor of the Trocadero Centre building on the Shaftesbury Avenue side. The space had previously been vacated by the Guinness Wold of Record exhibition. It was the first of London’s three IMAX cinemas and it opened on 17th December 1997 with the 3D film “Across the Sea of Time”, playing with “Grand Canyon - The Hidden Secrets”, “Blue Planet”, “Beavers” and “The Science of Fun - Thrill Ride” all playing at other hours of the day in rotation.

The Pepsi IMAX Theatre closed on 30th March 2000 with Walt Disney’s "Fantasia 2000". The space was converted into retail use. By 2008, it had been re-modeled into a new box office and foyer area for the Cineworld Shaftesbury Avenue multiscreen cinema, which is also located within the Trocadero Centre. It has since been remodelled into a part of a hotel within the Trocadero Centre.

I don’t know the opening date but it was a little earlier than Ken has stated above. I watched “Thrill Ride” here 14 12 97.

It was an excellent IMAX cinema. Headsets with “active shutter” LCDs and the “binaural personal sound environment” system (via in-built mini speakers) were handed out for 3D performances. It seems that it closed not long after the opening of the BFI London IMAX.

Actually it was a proper IMAX large format film venue. IMAX is now a digital operation and although some screens do not offer the immersive experience the BFI IMAX and Leicester Square Empire certainly do and are not LIE-MAX

The 70mm Pepsi Imax was replaced years ago its now part of a hotel iirc.

The hotel works seem to be well underway and sealed off from public access, AFAIK the area occupied by the former IMAX screen has been completely gutted out.

It was a 15/70 IMAX but the (now obsolete) PSE headsets with active shutter LCDs for 3D were of course digital and used an infra-red wireless system. The sound came from 2 additional digital tracks which were pre-recorded with the binaural processing. (The IMAX screen/rear speakers were used as well.)

Watched a documentary about Dinosaurs at Pepsi IMAX back in the 90’s. Need to dig my ticket stub out for the exact date. It was a great experience that nothing else at the time could compete with.

There was also an Alien War total reality experience in the basement of the Trocadero Centre which I also checked out which was fun.

“Across the Sea of Time (New York in 3D)” had the most stunning picture I’d ever seen—with the water in the foreground, it was almost like reality (as you’d have no chance of seeing in person) stretched out in front of you.

Of course, that was my impression relative to everything else at the time and I expect I’d now consider it disappointing!

I’m sure that I saw some other features there but I can’t remember which ones.

When the Pepsi Trocadero IMAX first opened, IMAX seemed to have sent over their own people, as the pre-show announcement was, IIRC, by a Canadian.

The active shutter headsets were superior to the polarised 3D system in the BFI and although the Pepsi Trocadero IMAX screen was smaller, I actually preferred it. Alas, it seems there are no pictures of the auditorium available anywhere.

It seemed ridiculous that, not even 18 months after the Pepsi Trocadero IMAX opened, the BFI IMAX was completed, having been built at considerable expense with Lottery funding. However, with hindsight it’s proven to be very successful and a lasting monument to large format cinema (even if it could now use a bit of a makeover.) The IMAX PSE active shutter headsets are long discontinued and I can’t imagine they are still being used in any IMAX today.

Page with some information on IMAX’s 15/70 digital sound formats and the PSE headsets.

LARGE_screen_format: I never did visit “Alien War,“ but I remember a magazine article on it; they were using 21” Fane Collosus drivers for subbass!

I did visit “Imaginator” and some of the “rides” at “Sega World,” although I’m not really sure why I bothered. They were all very forgettable, but I think that they all comprised short features front projected with moving seating (à la 4DX seats.)

Found a couple of 35mm photos of this Pepsi IMAX theatre including one of the interior, sadly the quality is poor because it was quite dark inside. T-Rex Back-To-The-Cretaceous was showing at the time.

There was another interactive experience in The Trocadero, Licence To Thrill. It was James Bond themed.

LARGE_screen_format: Are you able to scan it or maybe take a photo of it? Please? :–)

Better than nothing, and sometimes Photoshop can work wonders (if the information actually exists it can be “pulled out”…)

Can’t say I remember the “Licence to Thrill” experience, must have been before SegaWorld opened? (I did go to the “Guinness World of Records” that was there before SegaWorld and the Pepsi IMAX)—as an aside, I have a suspicion that many of those exhibits ultimately found a new home in the “Ripley’s Believe It or Not!” attraction in the (former) London Pavilion!