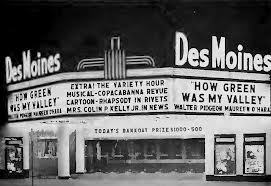 Located on Grand Avenue at 5th Avenue in downtown Des Moines. The Des Moines Theatre was opened July 10, 1919 with “For Better or Worse”. It was equipped with a 2 manual Kimball theatre organ. In November 1943 the World Premiere of “Happy Land” starring Don Ameche was held here, and the August 29, 1945 World Premiere of “State Fair” starring Jeanne Crain was held at the Des Moines Theatre. It was closed January 27, 1966 with Jane Wyman in “All That Heaven Allows. A few events were held in the theatre until it was demolished in May 1969 and a parking garage was been built on the site.

The Polk County Convention Complex now stands where the Des Moines Theatre was.

The Des Moines Theatre launched July 10, 1919 with “For Better or Worse.” The theatre was lauded for its Spanish Renaissance design. One of its biggest days was the World Premiere of “State Fair” that brought out both the stars of the 1945 film and the theatre’s biggest crowd.