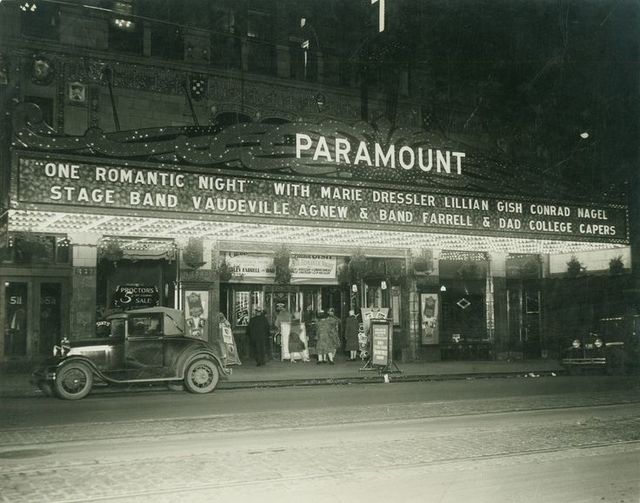 Located on Grand Avenue at 5th Avenue in Downtown Des Moines. The Capitol Theatre was opened under the direction of A.H. Blank on August 19, 1923 presenting Pantages Vaudeville and feature photoplays. Taken over by Publix Theaters Corporation, on May 10, 1929 it was renamed Paramount Theatre with Charles King in “The Broadway Melody”. It was closed February 28, 1973 with Stanley Baker in “Innocent Bystanders”. On April 11, 1974 it reopened as a dinner-theatre named Theatre Fabulous but this failed and closed May 20 1974. It reopened and closed again in June 1974. On July 30, 1974 it reopened as a country & western music venue named the Country Club, which closed in early-1975. The building was demolished, by using explosives, on October 14, 1979.

In the summer of 1967 I visited the booth at the Paramount. The projectionist was Norman Randolph who was business agent for the Des Moines IA local. They had a pair of Super Simplexes with SH 1000 soundheads and Four Star sound and Peerless Magnarcs on LL3 bases.
The film was “Bonnie and Clyde”.

The Polk County Convention Complex now stands where the Paramount was.

The principal architect of the Capitol Theatre was Norman T. Vorse, of the firm of Vorse, Kraetsch and Kraetsch. After the construction of the Capitol, the firm’s offices were moved into the 12th floor of the office building that was part of the project.

Here is a web page with a biography of Norman T. Vorse.

Sad loss for Downtown Des Moines, IS I know that the also lost the River Hills and the Riviera. Loved those theaters.

So, is this the original Pastime Theatre? This entry at Wikipedia makes me think so…

stevedenunzio: This page is for the Capitol/Paramount Theatre in Des Moines. The Wikipedia page you cite is about the Englert Theatre in Iowa City, so the Pastime/Capitol Theatre it refers to is also in Iowa City. Its Cinema Treasures page is at this link.

May 10th, 1929 grand opening ad as Paramount in photo section.

The Paramount Theatre closed February 28, 1973 with “Innocent Bystanders.” On April 11, 1974, it became a very short-lived dinner theatre called Theatre Fabulous. That closed May 20, 1974 before reopening and closing in June of 1974 after just 39 nights of total operation. On July 30, 1974, it was renamed as the Country Club, a country western theatre closing early in 1975. After a salvage sale in July of 1979, the building was imploded as the Paramount Theatre on October 14, 1979.

The theatre hosted the World Premiere of “The Night of the Hunter” on what was deemed “Paul Gregory Day" as the local producer was there along with most of the stars of the film on July 26, 1955.