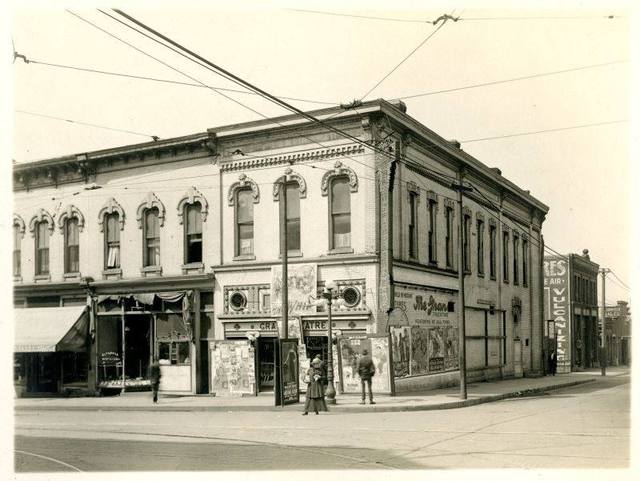 The Grand Theatre opened in 1914. It was on the southwest corner of East 6th Street and Grand Avenue. Cowboys and cartoons were it’s bread and butter. But it did run first run movies well after the second release. Ate lots of popcorn there, It was a basic theatre, with no balcony, a V-shaped marquee and no vertical sign.

Here is an article from the Cedar Rapids Gazette dated 11/30/53:

DES MOINES (AP)â€"Damage estimated at more than $80,000 resulted from a fire which gutted the Grand theater at East Sixth and Grand here Monday. Ten fire companies were called to fight the blaze which apparently started in the basement of the theater. No one was in the theater and occupants of apartments above the theater and an adjoining building escaped without injury. Fire Chief Charles Slade made a preliminary estimate of $75,000 to the theater itself. The operator of a cleaner’s shop in the theater building said damage there would approximate $8,000. Firemen fought the blaze for nearly two hours before seeing any flame. Most of the theater’s first floor dropped into the basement.

This was technically the third Grand in Des Moines preceded by the Grand Opera House that burned down in 1906 and was replaced by the Grand Theater which became the Berchel Theatre. This Grand opened in 1914. The Grand burned down just as the second twenty-year lease was expiring and business failing.

The Grand was paradise on the east side for the 10 to 11 crowd back in 1950/51. Every Friday night was family night and for 25 cent everybody got in! The 700 seats were full and up on the screne Roy Rogers sang as he shot the bad guys, who were also dirty, while Gale shouted “give it to them, baby”. Gaby Hayes was there for laughs. There were always two cartoons and at pop corn refill time there was the organ with the dancing ball for sing along. Sure. The Grand was already a little seedy like the rest of the East side business district, but between the Grand on Friday night and Johnson´s Drugstore´s comic section on Saturday morning it was still paradise for many of us. Back then we didn´t worry about the rough corners of the old buildings because the exalted self esteem of the post 49 Ford years were still around the corner. Further down the Jewel Theater was for more serious old reruns and older people.