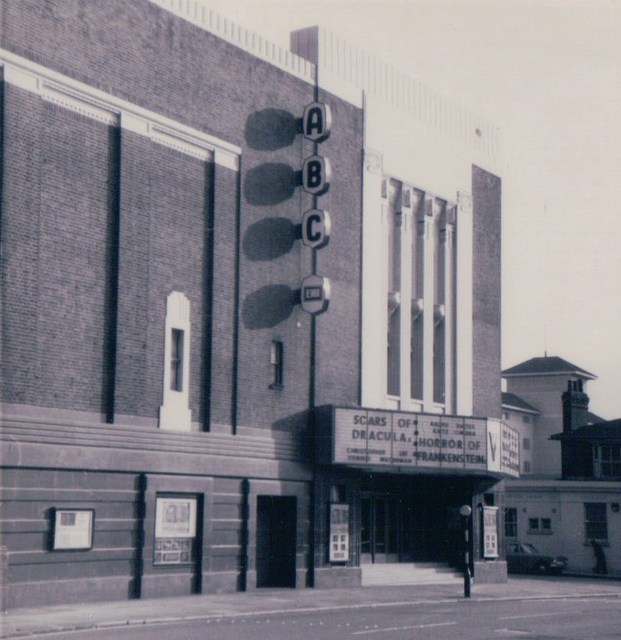 It opened on 15th February 1932 with Sydney Howard in "Splinters of the Navy" and Garry Marsh in "Keepers of Youth" plus Laurel & Hardy in "Our Wives". The magnificent Wurlitzer 3Manual/12Rank (with grand piano) organ was opened by Reginald Foort. The other facilities included a large stage, many dressing rooms and a cafe with a dance floor.

In 1940 a German bomb did some damage to the cinema and the organ, but these were repaired.

It was re-named ABC from August 1961 and in October 1972 the Wurlitzer organ was removed to be installed in the Musical Museum, Brentford, Middlesex. The ABC closed as a cinema on 17th July 1976 with "Blondie" and "Adventures of a Taxi Driver".

It was converted into a Coral Bingo Club and from 1991 it operated as a Gala Bingo Club. The Gala Bingo Club was suddenly closed in around April 2010, and the building was boarded up, with all signage removed. When closed it was in excellent condition.

It was purchased by a local man, who said he had plans to convert the building into a nightclub. Without permission, he set about internal demolition of the building, removing the glass sky-light above the stage, which allowed rainwater onto the stage. Decorative plaster was removed from the side-walls of the auditorium and all plaster-work was removed from the underside of the circle, leaving exposed supporting steel beams. The rear wall of the stalls was removed. He has been prosecuted for the damage done to the Listed Grade II building, and at a court hearing he was found guilty to carrying out unauthorised work on a Listed building and fined £45,000 with £29,200 to pay in costs. The now near derelict building has been purchased by a property company CNM Estates, who plan to convert the building into a gymnasium, retail use, office space and build apartments on top of the structure.

Vintage photographs, and details about the Wurlitzer organ and its console:
http://www.ukwurlitzer.co.cc/2174.html

looks like internal demolition has been occuring, bare rubble floor, interior stripped and stage area roofless by the look of it!!
a large chunk of the proscenium smashed off too
View link
View link

Walked past building today and noticed that the architects plaque has been uncovered during the stripping paint off the lower walls. It just says “Robert Cromie 1932”. I hope it’s left on display whatever happens to the building.
Urwin.

In the 1960’s a very fine sound system was in place and I remember seeing 2001 A Space Odyssey and Le Manns and the sound was specacular and realistic. I have not heard better cinema sound since including Odean Leicester Square. Modern cinema sound is too loud too base heavy and not a patch on what I used to hear at the Regel

URGENT! “SAVE The Regal Kingston” Please sign the petition of Kingston Regal Arts Association at www.change.org to stop CNM Estates disastrous plans for the redevelopment of the interior of this Grade II listed Theatre.

OBJECT NOW! Planning permission has been applied for and is open for comment at:– http://maps.kingston.gov.uk/isis_main/planning/Planning_DETAIL.aspx?strCASENO=1313017 DEADLINE is 3rd JANUARY 2014

I remember this place well. Saw many films there in 1966-70. I live in the US now, so I’d really appreciate updates on what becomes of this fine old building. Here’s a blog post I wrote that’s somewhat on topic:https://www.blogger.com/blogger.g?blogID=8393593#allposts/postNum=0

I went to the Regal Kingston several time in its cinema use, including a Midnight Matinee of “The Young Ones” where Cliff Richard made a personal appearance on the stage before the film. I also saw “Paint Your Wagon” and “Ben Hur” there in 70mm. I have also been there for Bingo!. Last time I went past in 2017 there was a lot of work going on but not able to get inside. I think the work was planned to be finished in 2018 so I will try and get along again soon. John