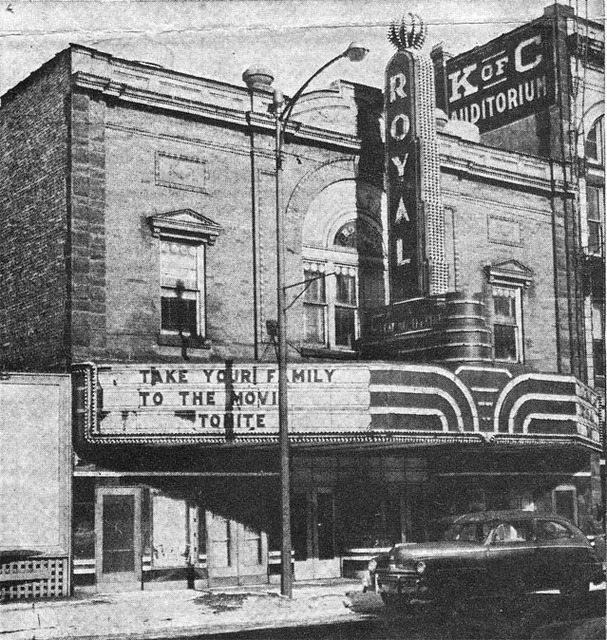 This article states that the Ashland was turned into a tire store after closure. It looks like it’s currently a beauty salon.
http://tinyurl.com/58g23z

That should be the Royal, not the Ashland.

The Royal Theatre at Ashland, Wisconsin, was mentioned in the April 1, 1916 issue of the trade journal Motography. The house was owned by Abe and Louis Latz and Leon Schwager.

The correct spelling of Abe and Louis' surname is apparently Latts. I’ve found quite a few instances of it in trade journals. The Latts brothers also operated the Majestic Theatre and, at one time, the Bijou. A Bertha Latts was still operating at least one theater in Ashland at least as late as 1939.

A Google Books snippet view of a 1983 survey of Ashland architecture says that the Royal Theatre was built by the Latts brothers in 1914. That means it was probably the project noted in the May 23, 1914, issue of The American Contractor:

Henry Wildhagen was probably also the architect of the Elite Theatre at Appleton, Wisconsin. His office was in Ashland.

Latts is correct. 1914 was the opening. Closing was April 1957. A 2-25-57 article in the Ashland Daily Press said the last performance in the theatre was going to be a legit show “Showboat Minstrel Days” on April 24-25, 1957 put on by “Irish Bill” Dormady, who had put on many shows in the city’s theaters. The photo “take your family to the movies tonight” was featured in this article but the date of that photo(?) it could have been a file photo. And, no confirmation found yet as to when the last films were actually shown here.