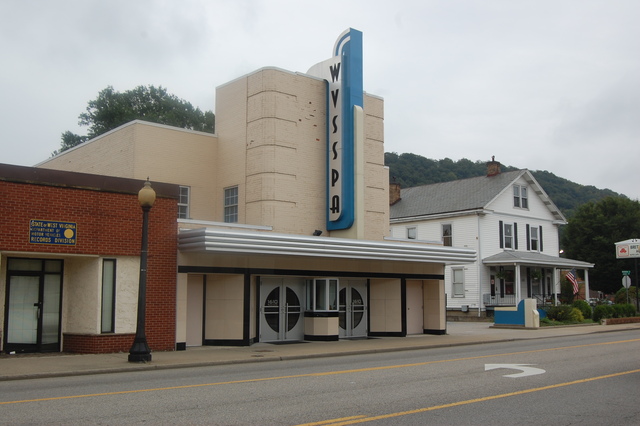 The State Theatre opened in September 1939.

The STATE THEATER was a small neighborhood theater. Located in,pretty much,a residential area near the West Virginia Capitol Building in Charleston, WV. I remember it was a brick building and always neat and clean with a small but fairly ornate marquee. It must have been open in the 40’s because my parents talked of going there before I was born. (1942) I just remember it as being a perfect little, well cared for,tastefully designed, neighborhood type 1940ish, faux art-deco theater. The STATE was located on Capitol Blvd. about half way between the big First run theaters in downtown Charleston (Now ALL gone)and the favorite neighborhood theater, in suburban Kanawha City, THE VILLAGE theater.
I went there on a rainy afernoon in 1957 or ‘58. Not even knowing what was playing and saw the funniest movie I had ever seen. Billy Wilders, SOME LIKE IT HOT.

I loved this theatre as well. I remember it as a beautiful art house. I went there numerous times with my family. “North By Northwest”, “Imitation Of Life”, “The Trapp Family” and “Blood And Roses” were some of the films I saw there. The STATE was elegant inside and very very clean. I loved the neon on the marquee and the tower sign. I wonder if the building is still standing.

I don’t think that address is right — or the photos in the previous two posts show a different building. The building in the photos is on Washington near Elizabeth.

The scheduled opening date for the State Theatre was September 12, 1939, according to Boxoffice of September 2. The State had 670 seats and had cost $65,000 to build. It was owned by Gene Custer and Floyd Price. The partners had opened the Lewis Theatre at Lewisburg, W.V., the previous week.

Boxoffice of December 17, 1938, said that E.R. Custer’s new theater at Charleston, on which construction was scheduled to begin soon, had been designed by F&Y Building Service, of Columbus, Ohio.

Gene Custer also operated the Custer Theatre in Charleston, which had opened in 1938.

The link below shows a recent photo of the WVSSPA building that used to be the State Theater:
View link

For those who are wondering, WVSSPA stands for West Virginia School Service Personnel Association.