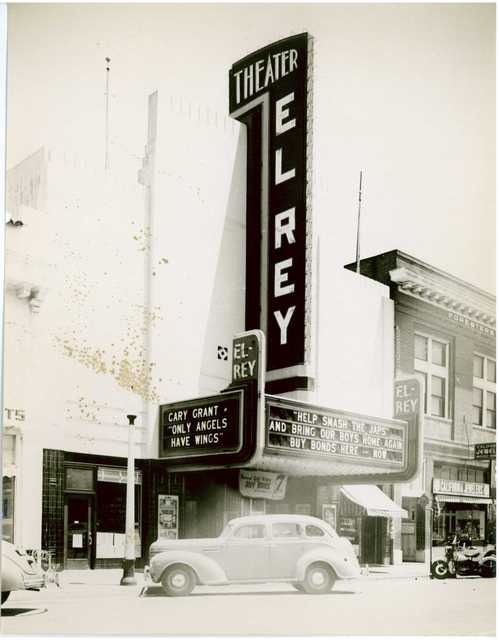 The El Rey Theater was opened on August 15, 1935 with Alice Brady in “Lady Tubbs”. Its sign still reflects its final operating name “Cinema I”, instead of the El Rey. The building has been up ‘For Lease’ since at least 2003. It was being renovated in late-2022.

Thanks Chuck! Your name will be displayed! It will be posted on 6/22

Hello All.
My Uncle, Lawrence Borg Built the El Ray.

in 1928 he became half owner of the Crystal Theatre Lease and Business in Salinas, California.

Under the Name of Crystal Theatre Company, , Inc., and was president of the corporation which in 1935 built the El Rey Theatre in Salinas.

Uncle Lawrence Also built the Alisal Theatre in Salinas in 1947

and was part owner of that property with John Peters and Fox West Coast Theatres until he sold his interest in 1949.

Dear Armstrongproductions. Please feel free to contact me. I am andrew. my email is I would love to help you. I may only be able to provide pictures. I am trying to locate drawings and such.. I look forward to hearing from you

Great shots Chuck. Ack this just kills me. I assumed from the state of things outside that the place was derelict and falling apart. And the only things in truly bad shape seem to be from water getting in SINCE the last closure! Those leaks arent repaired and teh place will just rot away when it seems to be so utterly restorable!

From Salinas a photo postcard view of the El Rey.

1944 photo added courtesy of the AmeriCar The Beautiful Facebook page. 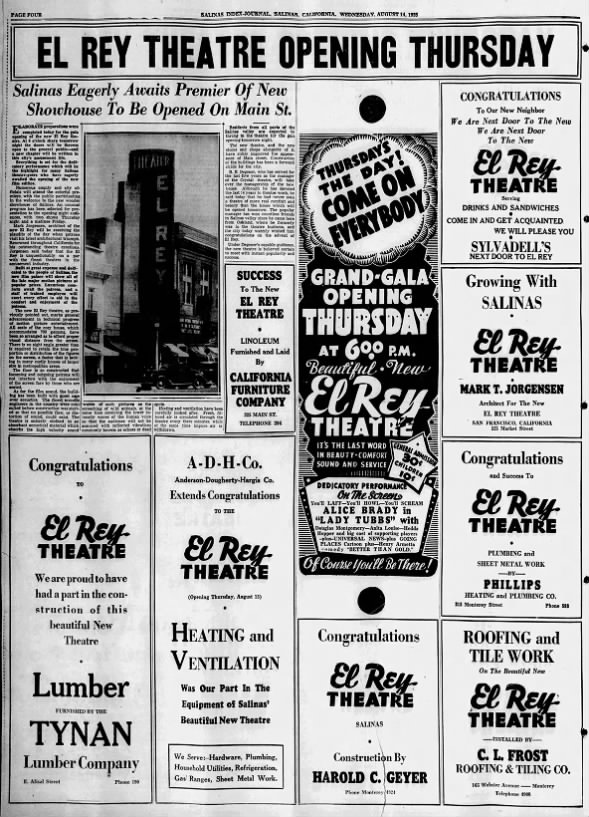 The theatre is undergoing restoration at the current time. Here’s a quote from Gary Parks on Facebook. “Work proceeds apace at the EL REY Theatre, Salinas, CA, a 1935 showplace that has been closed since 1989–save for a couple of brief uses of the lobby as retail space, and an abortive attempt at a church, which slathered-over the interior in harsh white. The exterior is being returned to its original, dramatic paint colors, and the original letterforms will return to the vertical sign and the little fins on the marquee. My etched glass partner and I are creating replica Art Deco etched glass to replace missing or broken pieces, for the interior light fixtures. El Rey will be a multi-use venue, but projection capability is planned, for maximum versatility when special events need it.” Exterior picture of construction activity is in the Photos section.