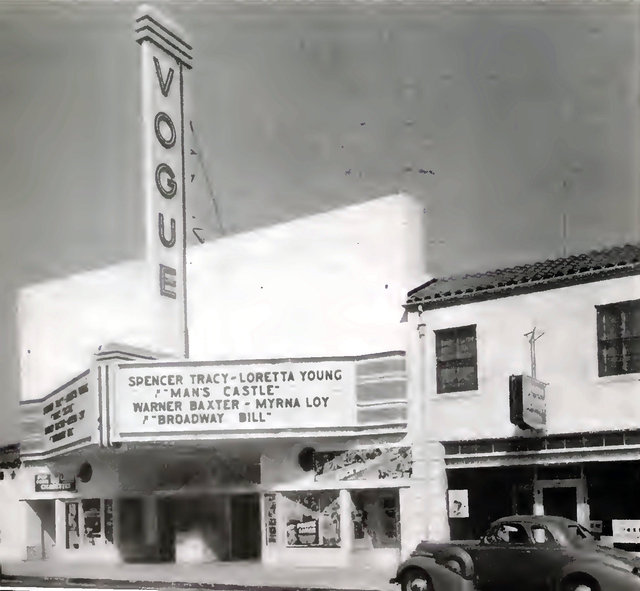 I also lived in Salinas from 1960 to 1979. Am I losing my mind or is this the Globe Theater? When I was 12-14 my paper route was all of downtown Salinas from the Californian building, Main Street, Monterey Street, etc. I remember almost every building in that area and what they looked like.

This is from Boxoffice magazine in October 1961:

SALINAS, CALIF.-Downtown Salinas will soon sparkle with a new theater when the old Vogue, dark and empty for two years, is reopened as the new Globe International by Kindair Corp. of Monterey.

Kindair, headed by Kirke Erskine and Bruce Matson, also owns and operates the Steinbeck and Hill theaters in Monterey, both first-run art houses. The Globe will also be an art house.

Matson will manage the new theater. Erskine will handle the designing end of the project. The theater, which originally seated 650, will be reduced to 450 luxury seats.

The theater building was completely gutted by its new owners. Reopening of the theater will mark the first new theater in Salinas in eight years. Matson said the theater will be furnished “in absolute luxury” and will have one of the most modern concession stands in Northern California. Erskine, who designed the Monterey Steinbeck Theater, is supervising the interior and exterior renovation.

The October 3, 1936, issue of Boxoffice ran an item about all three local movie houses in Salinas reopening after having been closed during riots related to a lettuce workers strike. The three theaters were the Crystal, the Fox, and the El Rey.

So this was the Vogue Theatre from 1939 until (probably) 1959, the Globe International from its renovation in 1961 until about 1975 (and perhaps just Globe Theatre for part of that time), and Cinema 7 from then until closing in the 1980s.

I noticed that it took quite a while for that comment to get posted. I wonder if other comments are replicating?

Here’s still more information about the Vogue, from the February 22, 1941, issue of Boxoffice Magazine. The caption of a photograph of the Vogue’s art moderne foyer lounge area attributes the design of the house to architect Vincent G Raney.

Growing up in Salinas in the 40’s and 50’s I remember the Vogue theater well. It was the local outlet for films from Universal Studios, and also showed lots of westerns, usually double-bills with Roy, Gene, and Lash LaRue.

The best thing about the Vogue was the popcorn! There was a large popcorn popper located to the left of the main entrance, with an outside window to serve walk-up customers on the sidewalk! You didn’t have to endure those movies to enjoy their wonderful, buttery popcorn!

The best thing about the Vogue Theater was that Miss Marilyn Monroe, 20th Century Fox Starlet, gave away a diamond ring there on Feburary 20th, 1948. It was part of a promomotion for Carlyles Jewelers.

It was still the Vogue as of the spring of 1953. The owner, Homer I. Tegtmeier, testified at the U.S. Senate hearings on small business when that committee was investigating complaints from small, independent theatre owners. He also operated a theatre in Watsonville. He had a lot of complaints about Universal, and was a leader of a group of Northern California exhibitors.