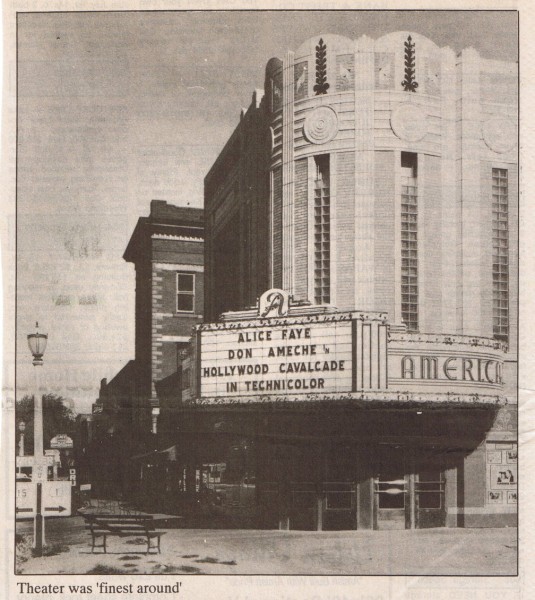 Mr. Harmon any idea who built The American? Did it also play it vaudeville in the 20’s? Were Ed Hart or Harry Hart early owners? Did it have a fancy cast iron frotage? Was the Gus Sun Vaudeville troops frequent performers?

Could the image listed above (by Lost Memory from May 16, 2009) be the Palace Theatre at 224 N. Market Street (see Historic Movie Theatres in Illinois, 1883-1960 by Konrad Schiecke, p. 291) and not the American Theatre at 903 Market Street? It looks this building (the one pictured) still exists and is a Masonic Lodge.

The March 11, 1939, issue of Boxoffice reported that the American Theatre in Mount Carmel had been badly damaged by fire. The item said that a print of the Republic film “Forged Passport” had been destroyed. Owner Theodore Coleman had been vacationing in Florida when the fire took place.

It looks like the theater was only two years old when the fire struck. Boxoffice’s survey of construction in the ST. Louis area published on October 16, 1937, lists the New American Theatre, 700 seats, Mt. Carmel, Ill., for Theodore Coleman. Boxoffice gives no details, so I don’t know if this was entirely new construction or an alteration of an existing theater.

The rebuilt American had an impressive Art Deco facade. A photo of it was featured in a May 25, 1940, Boxoffice article on theater fronts. The photo is here (lower right corner.) The text pertaining to the American is on the following page. It says that the design for the rebuilding was done by St. Louis architect Oliver W. Stiegemeyer.

A March 8, 1947, Boxoffice article about St. Louis’s film row said that Theodore Coleman had opened his first theater, the Joy in Mount Carmel, in 1916, when he was 14 years old.

I haven’t found any references to the Palace Theatre in Boxoffice at all. The American and the Uptown are the only Mount Carmel theaters it mentions until the Carmel Drive-In shows up in 1950. The Palace might not have operated past the silent era.

The American Theatre was launched by Theodore Coleman on August 2, 1920 with the films, “Excuse My Dust” and “His Last False Step.” Coleman closed the five-year old Joy Theatre upon the opening of the American. The $45,000 theatre moved to the sound era installing Movie Phone equipment and the film, “Alias Jimmy Valentine” on Valentine’s Day 1929.

A fire destroyed the lobby and gutted the auditorium on March 5, 1939. The fire took out adjoining businesses including an auto battery store and a cafe. The American was completely rebuilt with the possible exception of the auditorium’s back wall relaunching September 2, 1939 as the New American Theatre with “Stanley and Livingstone.” The theatre closed on December 20, 1957 and was used sporadically for live events. It was torn down in June of 1963.