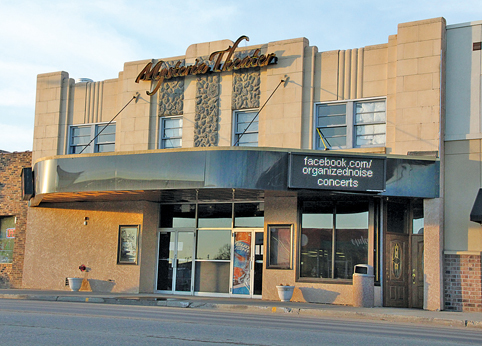 The Mandan Theater opened in November 1936 with Shirley Temple in “Poor Little Rich Girl”. It became the Showboat Cinema on November 8, 1974. It was twinned in 1976 and closed at Christmas 1986.

It reopened as a discount theatre on June 12, 1987 and was renamed Academy Theatre. It closed ion September 12, 1993. It was re-named Mysteria Theater in November 2008, operating as a live theatre until 2014. It was opened as a sports bar, known as the Little Chicago Club.

This 10/7/07 article presumably refers to the Mandan as the other theater on Main Street is still open:
http://tinyurl.com/2ag5g8

I recently passed by the former Mandan Theatre(Now called the Mysteria Theatre) and it seems that the renovations are complete, they are just looking for employees. Will post pictures at a later date.

Boxoffice of December 2, 1974, said that the former Mandan Theatre had reopened as the Showboat Cinema in mid-November, following a $100,000 renovation. It was a single-screen house with 412 seats. The Mandan Theatre had originally been built by Frank Wetzstein.

Photos of the Showboat Theatre appeared in Boxoffice of June 30, 1975.

I’ve had no luck finding a confirmation of the address, but the June 6, 1977, issue of Boxoffice has a list of theater projects completed during 1976, and it includes the Showboat Cinema 2 at Mandan, with 144 seats. As the item doesn’t mention a Showboat Cinema 1, I suspect the new screen might have been in an addition or in space annexed from an adjacent building rather than carved from the existing auditorium.

“The Last Unicorn” I remember that summer movie and couldn’t figure out how GCC got it.Nice looking theatre.Hope they did some business.

This is now called the Little Chicago club, the hottest new Bar in Mandan.

Wetzstein sold the theatre in 1974 to Jerry Brekke. He converted it to the Showboat Cinema relaunching November 8, 1974 with “That’s Entertainment.” The color scheme was bathed in red. In December of 1976, it became the Showboat Twin Cinema I & II. The second cinema color scheme was blue and purple with blue shag carpeting on the wall. The venue closed on Christmas of 1986.

The Midcontinent Theatre Co. Circuit (aka MidCo) took on the Showboat and converted it into a discount sub-run operation called Academy Theatre beginning on June 12, 1987. That came to an end on September 12, 1993 with “Cliffhanger” and “Aladdin.”

It relaunched as the Mysteria Theatre in November of 2008 until 2011. It then rebranded as a live venue called Organized Noise Entertainment or O.N.E. in 2012 before reverting back to the Mysteria briefly in 2013 and 2014. It was converted as a restaurant and sports bar thereafter.