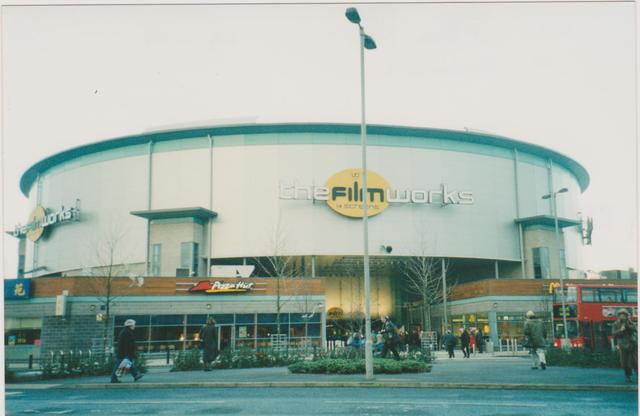 Located in the southeast London district of Greenwich. Originally opened as The Filmworks, this was an upmarket ‘next generation’ of multiplex cinemas which United Cinemas International(UCI) were promoting in the late-1990’s and early-2000.

UCI Filmworks Greenwich opened on 6th April 2001 and was the second & last of this breed to be opened from scratch, although there were two other former UCI cinemas which were ‘upgraded’ to this standard. Architecturally it could be described as ‘Industrial’ as no attempt was made to cover over ducting for the air conditioning, or hide the basic structure of the building. All beams and joints are left exposed. Opened as a 14 screen cinema, seating capacities vary from 447 down to 48.

It was taken over by Odeon Theatres in late 2006 and has been re-branded with the Odeon name.

there are only 14 screens, the four additional screen mentioned are the luxury seating balcony areas in the four biggest screens

screens 13 and 14 seat 48 each, they are like tiny screening rooms, the other four are the luxury seating areas of the four biggest screens accessible from the top floor VIP lounge area, these seats have different ticketing and i think are 18+ only

Woody; Thanks for clarifying the statistics

This cinema was the location for the shooting of the comedy Popcorn. This was made in 2007 but not very successful. The actors had to film at night after the cinema had closed to the public.

This cinema was opened by girl group Atomic Kitten.

Screen 9 (IMAX) measures an unimpressive 15.1m x 7.76m (smaller than Cineworld, Hemel Hempstead (18.3m x 10m) that I visit fairly often. Had I known that prior to purchasing tickets, I probably wouldn’t have bothered? Two tickets plus food cost the best part of £70. That’s over twice the cost of owning the movie on 4K UHD (including regular BluRay).

Used to watch quite a few movies at this cinema back around the mid 00’s. Usually two to four movies in one day (Sundays). The two largest screens (numbers 10 & 11?) seemed a decent size at the time. The smallest screen with a mere four rows seemed more like a private screening room and to date is the smallest cinema auditoria that I have ever watched a movie in.

The luxury leather seats in the Gallery sections are the most comfortable I have tried at any cinema (I have yet to visit a cinema that has luxury electric recliners). Shame, that they are only available to customers willing to pay ~£24 per ticket. Yes, the price includes popcorn/drinks but if one does not want either of those then the uplift charge of over £10 compared to a non-Gallery seat seems rather high!

LARGE_screen_format: If you’re in that area again, you might want to try the Superscreen at the O2, as it has a very well spec’d sound system, with almost the same screen speaker setup as the Cineworld (Empire) Leicester Square Superscreen, and Atmos installed since the linked press release was published.

Parking is insanely expensive at the O2, but Cineworld patrons are allowed 4 hours' free parking.

I don’t think I ever went to the smaller auditoria when it was “the filmworks,” although even though I visited on multiple occasions, The only movie I can even recall seeing there was “Ocean’s 11”!

£70 for tickets including concessions? Absurd… looking at the ticket prices for the Greenwich IMAX, it is almost at West End levels?!

Would be interested to see pictures or find out more about these “luxury” “The Gallery” seats. My favourite cinema seats of all time are still the red American Seating Company “rocker”-type seating that were installed in the old Empire 1. (Albeit comparing them to old catalogue photos of their product line, as well as photos of the “new” Empire taken back in 1962, it does seem that they may have “gained” padding when overhauled—either that and/or there were seat covers on top of seat covers!)

BTW, if you are not aware already, Odeon are offering a 40% off discount code valid until the 11th July (works for tickets for 2D/3D performances including premiere seats and PLF screens but not certain titles including “Jurassic World: Fallen Kingdom.”)

If I’m not mistaken UCI Wycombe 6 had identical seats as those you mention from the good ole days at The Empire, Leicester Square and I agree they were super comfy.

I was really annoyed when they were replaced with inferior seats some years later but could understand the decision to replace rather than refurbish due to cost implications.

There’s an image of the Gallery luxury seats in this article:

If you do a google image search you’ll find others too. ;o)

Will endeavor to visit the Superscreen at Cineworld, O2, Greenwich at some point. It’s one of zappomatic’s favorite auditoria.

Watched Sicario 2: Soldado earlier today so there’s nothing else released until after the Odeon discount code expires that I want to see but haven’t already. Thanks for the heads up all the same. :o)

The Gallery was a fantastic option to pick if you wanted a more “luxury” option. However in my opinion (something I pointed out to Odeon) it was cheapened in it’s quality when then stopped offering despensed soft drinks and offered a bottle instead!