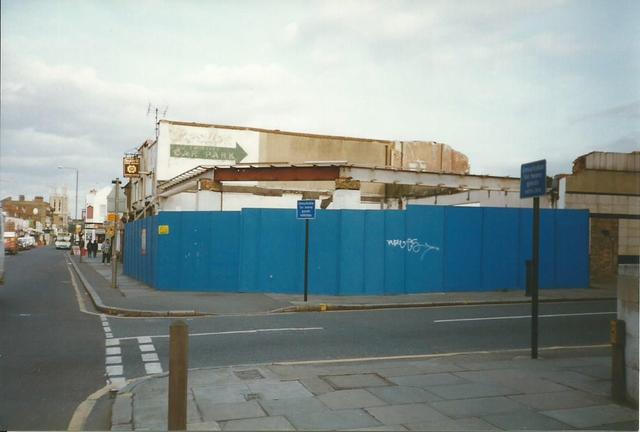 Located in the southeast London district of Greenwich. The Trafalgar Cinema opened on 26th December 1912. It was a well decorated building which had a tower and dome above the corner entrance at Trafalgar Road and Maze Hill. It was designed by the architectural firm Ward & Ward and had a seating capacity of 815 seats which were all on one floor. Initially operated as an independent cinema, it was later managed by Greenwich Picture Palaces Ltd. in the 1920’s.

In 1934 it was taken over by D.J. James and the building was re-modelled, giving it a more ‘modern’ look. A balcony level was added, giving a seating capacity of 1,400 and architects Leslie H. Kemp and F.E. Tasker were the designers of what was virtually a new building which opened on 16th September 1935 with James Cagney in “Devil Dogs of the Air”. Variety shows were often presented as part of the film programme as the cinema had a 20 feet deep stage and two dressing rooms.

It closed on 30th April 1960 with Sid James in "Carry On Constable" and Joel Lawrence in "Road Racers". The frontage of the building was removed and it was converted into a garage and car sale showroom. Later it became a supermarket and then briefly a furniture store in June 1995.

It was demolished in around 1998 and an office block was built on the frontage part, with flats built on the auditorium part in 2004.

The former Trafalgar Cinema/Odeon photographed in use as a supermarket in July 1983:
View link

The new Trafalgar cinema opened on 16th September,1935. The main film was ‘Devil Dogs of the Air 'featuring James Cagney and Pat O'Brien.