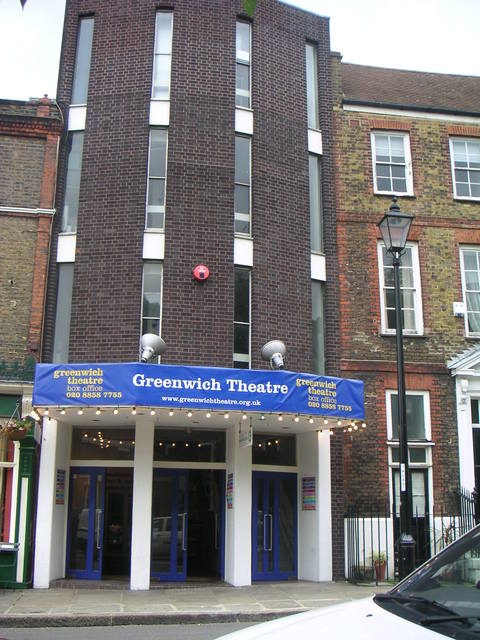 Located in the southeast London district of Greenwich. Originally a music hall attached to a public house, the Greenwich Theatre dates from 1855. It was re-constructed in 1871 to the plans of architect W.R. Hough, then underwent another re-construction in 1885 to the plans of architect J.G. Buckle. It had many names and changes of ownership. In 1895, it was re-modeled and became the Greenwich Hippodrome. By 1913 until at least 1915 it was screening films. Live theatre use began again, then in 1924 it became a cinema once again. By 1937 it was operated by the London & District Cinemas Ltd. chain.

After 1949 it closed altogether and narrowly avoided demolition in 1962 when Ewan Hooper waged a long battle to have it reopened as an arts centre.

This campaign was ulitmately successful and the Greenwich Theatre was reborn in the shell of the old theatre in 1969. A new entrance in Crooms Hill was constructed and the auditorium was completely rebuilt as a stadium plan theatre with an open thrust stage. Parts of the exterior walls - particularly to Nevada Street are of a much earlier vintage (at least 1885 as in some lights the inscription "Parthenon Palace of Varieties" is still discernable).

The architect for the reconstruction work was B. Meeking. The adjacent Rose & Crown pub, to which the original music hall owes its existance, was rebuilt (possibly to the designs of Frank Matcham) in 1888.