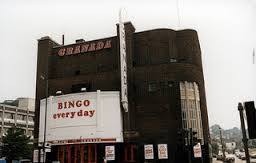 Located in the southeast London district of Greenwich. The Greenwich Granada was one of the plainest of the purpose built Granada Theatres chain, quite probably due to its awkward site size;long and narrow. It is situated on Trafalgar Road at the corner of Vanbrugh Hill.

It was opened by film star Gracie Fields on 30th September 1937 with Sabu in “Elephant Boy” and Brian Donlevy in “Midnight Taxi”. Designed by noted American theatre architect C. Howard Crane, with interior decoration by Theodore Komisarjevsky. It had 1,924 seats in stalls and balcony and a rather plain auditorium, quite unlike the style of the opulent Woolwich / Tooting / Clapham Junction Granada Theatre’s. It was equipped with a Wurlitzer 3Manual/8Ranks organ which was opened by organist Donald Thorne. The Granada Theatre also had a fully equipped stage.

Bingo was introduced part time from 1963 and the Granada closed as a cinema on 8th June 1968. Since then it was used as a full time Granada Bingo Club, and later a nightclub. In the early-2000’s, it was gutted to provide a large number of apartments requiring additional windows and balconies to be punched through the walls, a new raised glass roof to light a central atrium and the removal of a raised fin on the front façade.

The main foyer and circle foyer have been adapted to form a Chinese restaurant with large glass windows replacing what was the huge billboard for advertising the current films.

Vintage photographs of the Granada (as a bingo club), and its Wurlitzer organ console:
http://www.ukwurlitzer.co.cc/2212.html

All very out of date! Inside is a friendly community of flat dwellers – with an atrium with amazing tin can palm trees full height. Currently the front is an estate agent, having been a betting shop. The basement has been a series of bad news night clubs – closed down by the Council. Its called The Plaza