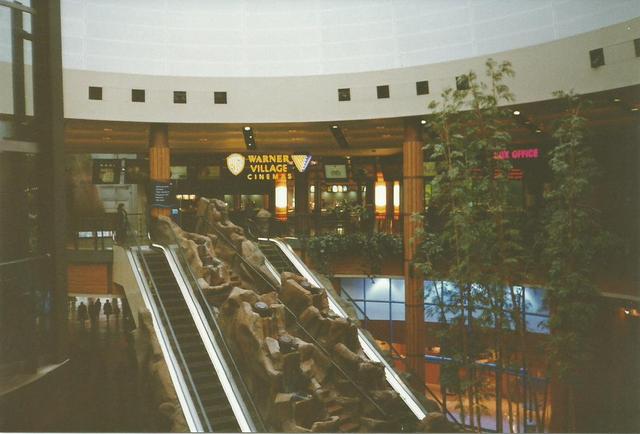 The 8-screen Warner Cinema opened on 20th November 1998. It is located on the 1st floor of the O2 Leisure Centre near Swiss Cottage, South Hampstead in inner-city north London. Seating was provided for 1,935.

The cinema now has 12 screens.

Five of them (Nos 1, 4, 6, 8 and 11) have 2.39 Scope screens with Screen 8 being the largest and branded ‘XTreme’. The remaining 7 have 1.85 screens necessitating Scope films being shown letterboxed top and bottom.

At the time of build in the 1990s it was standard Warner Village policy just to have full Scope screens in the larger auditoria with 1.85 ‘Flat’ screens in the smaller and often narrower auditoria. Then it didn’t matter so much as Scope films were not as common as they are today.

I visited the Vue Finchley Road (O2 Centre) today to attend a preview screening in Screen 8 (Xtreme), having not been here since the late 1990s, when I saw a couple of movies at this cinema.

The Xtreme screen isn’t quite wall-to-wall but there’s no tabs or masking; perhaps the screen was increased in size when Vue rebranded the auditorium as “Xtreme,” but the rear array speakers certainly don’t seem to have been upgraded, being the same KCS surrounds that were installed at opening!

The auditorium is fairly deep with 16 rows, the front 5 of which are on a flatter rake, and the rest on a fairly steep stadia, with 5 rows of VIP seating in the centre section. Looking at satellite images of the complex, the auditorium is perhaps 80ft. deep, and I ended up in a seat near the rear of the auditorium.

The experience was therefore far from “Xtreme” but the picture quality was good, with no obvious signs of geometric distortion, and the sound was acceptable but not outstanding.

It has been overhauled to an extent since opening, Screen 8 being fitted with black stretched fabric on the auditorium walls and black leather seating (same type as Vue Westfield London (Shepherd’s Bush) IIRC — not comfortable at all and slightly sagging!) Corridors have the same signage and red coloured wallcoverings as Vue Westfield London (Shepherd’s Bush.)

It is mostly in reasonable condition though slightly shabby in a few places, notably with paint chipped off skirting corners along the vomitory access into the auditorium, and some slight damage to wall coverings in the corridors leading to the auditoria.

Some Warner Village late 90s “house style” features remain, such as the circular gantry in the foyer, from which I assume decorative “triangle” shaped blue and yellow cold cathode strips were originally hung, and “star” shaped handles on auditorium entrance doors.

The air conditioning was absolutely not up to standard, being hot in the corridors leading to the auditoria, and mostly too hot in the auditorium itself—just not a sufficient relief from the 30°C temperature outside. However, the atrium of the O2 Centre, with escalators leading up to cinema entrance level, was adequately cooled.

Incidentally, at this site Vue are currently offering “Super Monday” tickets at £4.99 for 2D screenings in standard seats (albeit with additional charges for 3D/Xtreme performances and VIP seats.)

Have been meaning to check out this cinema but each time a friend of mine has mentioned that car parking is really expensive so instead we have ended up at Vue, North Finchley. Vue, Westfield Shepherds Bush was the last place we paid for car parking when watching a movie and £8 for anything over 2 hours just adds to the cost of admission. We’ve chosen Vue Xtreme at that cinema a couple of times but have left disappointed compared to IMAX. The last movie was Ready Player One which was in scope and because the screen was 1.85:1 around one third of the height is lost due to the black bars which kind of defeats the whole…’as tall as two double decker buses’ advertising.

LARGE_screen_format: I travelled there yesterday on the Tube (Jubilee Line.)

The current pricing for parking is on O2 Centre’s website. Given the terms stated on that page, the centre’s 500 car parking spaces are clearly intended more for the use by customers of the supermarket/DIY centre, e.g. the 2 hours' free parking offer for those shopping at those stores is forfeited should the duration of their parking stay exceed 2 hours.

I, too, wasn’t overly impressed by the Xtreme screen (Screen 7) I’ve visited a couple of times at Vue Westfield London (Shepherd’s Bush), nor the venue as a whole for that matter, given that it’s a “flagship” location.

The screen is somewhat bigger than that in the O2 Finchley Road Xtreme (18x10m (~59x33ft.) according to a Time Out article cited by a Wikipedia article) but with 18 rows the auditorium is quite deep.

To cut Vue a bit of slack, although in the case of their two Westfield sites I’m not really sure they deserve any given how successful those locations are, the PLF market and cinemas in general are moving at a very rapid pace.

£15 in parking for one movie (likely to be over 2 hours including adverts and trailers) is outrageous imo. From the sounds of things this is by no means a flagship cinema and therefore I don’t think I’ll be rushing to visit it anytime soon.

Thanks for the info.

That said, cinema customers are actually eligible for the “shopper tariff,” so it would be £6 for 3-4 hours.

Plans were supplied by UNICK Architects.

Estimating the Auditorium 8 (aka “Vue Xtreme,”) based on the screen size given in Vue’s press release (linked to above) and the screen as drawn on the plans, the auditorium measures approximately 19m wide by 26.5m deep (or ~62ft. x ~87ft.)

The second row of the “VIP seats” is ~1.2x screen width away from the screen, and the rearmost row of all the seats ~1.65x.

Not to say that there’s anything “wrong” (or “right”) about the auditorium—it might be a black box, but I think it’s pretty good in terms of build (e.g. acoustic isolation and absorption)—but just to compare it to classic IMAX criteria for horizontal viewing angles/“immersiveness.”