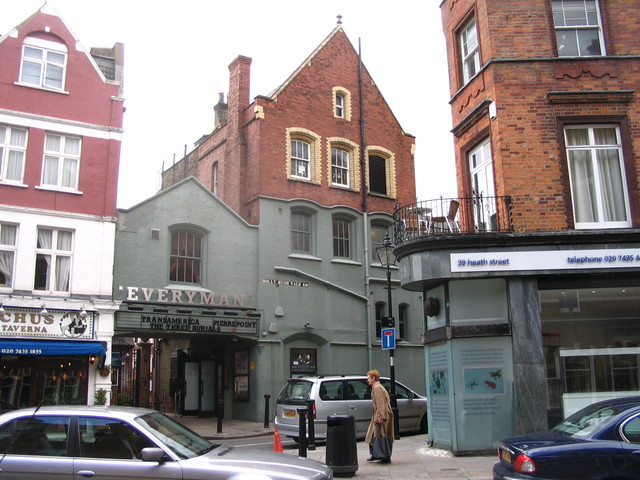 Located in Hampstead, north London. The building was built in 1888 as a community centre and assembly room to commemorate 50 years of Queen Victoria’s reign. It was known as Hampstead Drill Hall, as it was the base for the volunteer Hampstead Regiment. Films were screened in the basement by the late-1890’s. It opened as the Everyman Theatre on 15th November 1920 presenting plays by new playwrights and closed in November 1933.

The Everyman Cinema Theatre opened on 26th December 1933 with Rene Cair’s “Le Million” and “Turbulent Timber” a Mack Sennett comedy, a Walt Disney cartoon and Paramount News. Actor and local resident Sir Gerald Du Maurier officiated at the opening. Architect Alistair Gladstone MacDonald, son of Prime Minister Ramsey MacDonald, redesigned the building for cinema use with 285 seats. It was equipped with a Western Electric(WE) sound system. Initially it was not a great success, but in 1934 it gained an audience by importing foreign films which could only be seen at the cinema. The Everyman Cinema was closed in September 1940 due to wartime conditions and it remained shuttered until re-opening on 22nd April 1943 with Dorothy Lamour in “Typhoon” & Mary Martin in “The Great Victor Herbert”. Following the end of World War II, it returned to screening European films.

In 1954 it was equipped with CinemaScope and a small art gallery became a feature of the foyer. Sunday morning concerts were held in the auditorium. The Everyman Cinema suffered from the downturn in cinema admissions during the late-1960’s and was struggling to remain open in the 1970’s.

Margaret O'Brien took over as manager, having managed the Electric Cinema in Notting Hill and turned its fortunes around. It was refurbished in 1984 with grants from the Greater London Council and Channel 4 TV station. On 20th October 1986 a cafe/restaurant was opened in the basement. A Saturday morning children’s cinema club was introduced, as were themed cine-variety presentations in which live concerts followed film shows. The main auditorium now seats 122,

By April 2009 a 72-seat second screen has been added in the basement. There is also a private screening room with 15 seats.

the theatre is mentioned by name in the first line on the lyric to HAMPSTEAD INCIDENT, the closing song off of the popular MELLOW YELLOW album by DONOVAN, circa late 1966 – early ‘67.

I seem to remember a regular Marx Brothers mini-season each year in the 1960’s, I think. I went to a couple and the place was packed! As was a film with G B Shaw that my mum took me to in the late 50’s. He was chatting away in his, or somebody’s, back garden. I was probably too young to appreciate the “wit”, but I wonder what film it was…

Neat name for a theatre.It is different.

Very neat Cinema from the photos,a lot better than our multi-plexs!!!!

It also gets a mention in Peeping Tom

They used to put on classic double bills, but the rep programmes largely stopped after it got taken over by Pullman in the late 90s

A booklet celebrating the cinema’s 21st anniversary in 1954 (ie covering 1933-54) is held by the Kent MOMI Museum in Deal, Kent