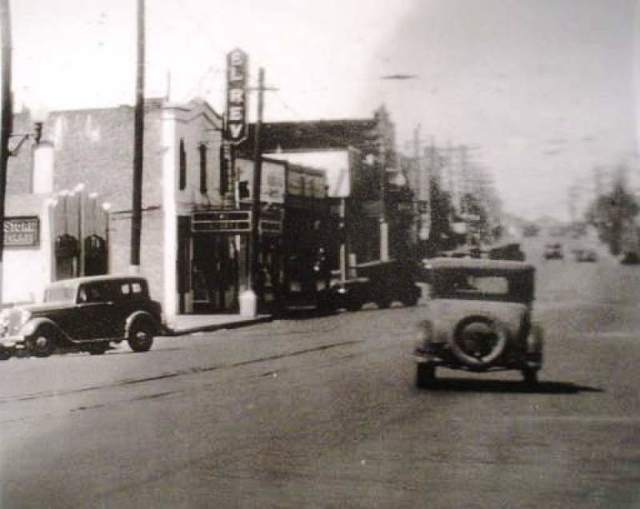 Originally at this address was the Hotel Knowles which was built and opened just prior to the 1906 San Francisco earthquake. The Knowels Hotel collapsed, but was soon rebuilt and was eventually known as the Gravenstein Hotel. It was transformed into the Royal Theatre, which opened September 22, 1927. The opening movie was Bebe Daniels in “Swim Girl, Swim” and also starred Gertrude Ederle, the first woman to swim the English Channel. The support was the silent cartoon “Koko Plays Pool”.

Boxoffice Magazine references to the El Rey go back as far as the July 17, 1937, issue, which reported that Dan Tocchini, who had recently taken over the house from Bruno Vecharelli, was planning to spend $15,000 on renovations for the 400-seat theater.

Various issues of Boxoffice from 1946 to 1948 tell of progress on a new theater in Sebastopol called the Analy, built by Tocchini and Tony Gambogi, operators of the El Rey. The item about the new house in the May 15, 1948, issue says that the partners would probably runt he El Rey on a weekends-only policy after the Analy opened.

The Analy is mentioned in various issues of Boxoffice into the 1950s, but the El Rey disappears by the late 1940s, so was probably closed completely after the Analy opened. I can’t find an address for the Analy, but Boxoffice gives the seating capacity as 850, and says it was to be a “stadium style” house.

It’s difficult to find the fate of the Analy on the Internet, as Sebastopol has an Analy High School with an active theatre arts program, and the school calls its auditorium the Analy Theatre. I don’t think it’s the same building, though, as the high school is out on the edge of town, and its web site says that their theatre, currently under renovation, has been in use for eighty years.

Interestingly enough, the recent occupant of the premises at the El Rey’s address as listed above is the Analy Furniture Co-op.

I have a ½ dozen El Ray Monthly schedules the last one for August 1946. The Analy was at the site of the current Safeway parking lot on the north-west end of main street about 300 feet back from the corner. I spent a lot of time in the Analy as a kid in the middle-late 1960’s.

Two door down from my parents place lived the Gambogi’s, I grew up with their sons. Across the street from them lived Norma Gambogi. She was a Tocchini. She always had her hair in a white beehive with fancy black rimmed glasses and drove a red Cadillac convertible.

I used to listen to her and my late mother talk about the movie house business. My mothers Uncle, who she worked for in the 1930’s, was president of Associated Theaters of Cleveland, Ohio.

It killed me when the Analy was sold. It was a great old movie house. In Santa Rosa in the old railroad square area is another Tocchini move house with the name Tocchihi still on it. It is now a night club of some sort.

Opened September 22, 1927 as the Royal Theatre. On November 19, 1930, the Royal converted to sound. The theatre stopped showing films late in 1931 and closed. It reopened April 7, 1932 as the El Rey Theatre with its grand opening ad with “Emma” in photos.