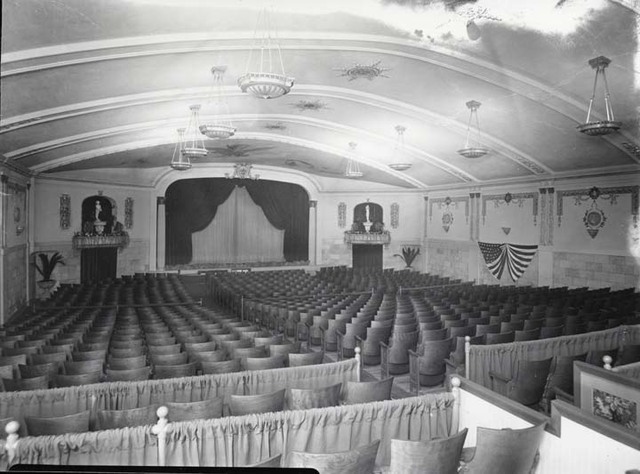 Opened as the Florence Theatre on March 28, 1918 with William Kerrigan in “The Turn of a Card”. It was equipped with a Seeburg-Smith pipe organ which had a 2 manual console. It was renamed State Theatre in 1935. This former Fox house closed and was later operated by Pussycat Theatres, in the 1970’s and 1980’s. It became an independent theatre, closing in 2000. It was demolished, apart from the façade, which is now the entrance to retail and office use.

Here’s a photo I shot back in 2000 of the marquee before it closed down:

The State Theatre nearly had a much larger theater as a neighbor. In 1927, the October 8 edition of Building and Engineering News reported that architect B. Marcus Priteca was preparing the working plans for a seven-story theater, commercial and office building at the southwest corner of Colorado and Hudson in Pasadena. Had it been built, the new theater, which was to be leased to the Pantages circuit, would have seated about 2,200, making it a little over two thirds the size of the Hollywood Pantages, opened in 1930. The theater portion of the Pasadena Pantages was to have been 110x170 feet, and the frontage building containing the entrance and lobby would have been 116x90 feet.

Another Pasadena theater that was planned but never built was a large house for Warner Bros., also to have been designed by Priteca, and slated for the corner of Colorado and Euclid, which is very near where the Arclight Pasadena is now located. This theater probably would have been very much like the Warner houses Priteca designed for Beverly Hills, Huntington Park, and San Pedro at about the same time.

I remember they screened Run Lola Run here. Sad when it was shut down. Things change. sometimes not for the better. isn’t there a Liberty tax there now?

Manwithnoname, Thanks for the memory of Canterbury records. I haven’t lived in Ca. since 1968, before the freeway.

“The Encyclopedia of the American Theatre Organ” by David L. Junchen, page 628, lists a “Pasadena Theatre” in Pasadena, California, as having a three manual Smith theatre pipe organ.

No other details, such as # of ranks or installation date, are given.

I could not find a “Pasadena Theatre” listed on this site right now (April 2014) but this has a fairly close name. However, according to Lost Memory, this “Pasadena Photoplay Theatre” apparently had only about 350 seats, and most three-manual theatre organs had at least ten ranks.

The largest known Smith organs were both 4 manuals and 16 ranks, so that this organ in question was probably between 10 and 14 ranks, or so.

This is quite large for a little 350-seat theatre, since most theatres of this size either had a photoplayer (such as those made by American Photo Player Co, or Wurlitzer) or simply a person playing the piano, or, if an organ, nothing larger than about six or seven ranks (and thus, two manuals). Thus, I think it is unlikely this is the same theatre mentioned in the book.

Does anybody know more about this instrument, or a larger “Pasadena Theatre?” in Pasadena?

I think the State might be a good candidate, time-wise and size-wise, for having had such an organ, so am placing this here also for the time being.

The State was not gutted, the theater was torn down. The face to the theater was kept and restored. The builders could have used the space and restored the old theater house as retail space but the powers that be did not. We all fall for such perverse business ( $$$ ) ideals ! Just look at how beautiful the house for State WAS for that period in the pix above.

I’ve read conflicting reports of this building being gutted vs. torn down. The complete teardown (minus the facade, of course) theory made sense until I walked around to the back on the Oak Knoll side where the curved roof is clearly visible at the back of the structure where the offices are now located. It seems very odd that they would have chosen to build the roof like this if it were truly all new construction. I’m going to go non-suspiciously poke around inside that back office area one of these days!

AndrewBarrett: You will probably be interested in this item I ran across in the February 9, 1918, issue of The Moving Picture World:

“The new Florence theater, soon to be opened in Pasadena under the management of D. B. Schumann, is installing a two-manual and piano-manual pipe organ built by the Seeburg-Smith factories at Chicago. This firm is practically a newcomer on the coast and especially in the South, although it is very well known in the East and throughout the Middle West. C. R. Dibble Company of Los Angeles made the sale, and is superintending the construction.”

Listings for the state theatre in Pasadena started in 1935 in the LA Times.