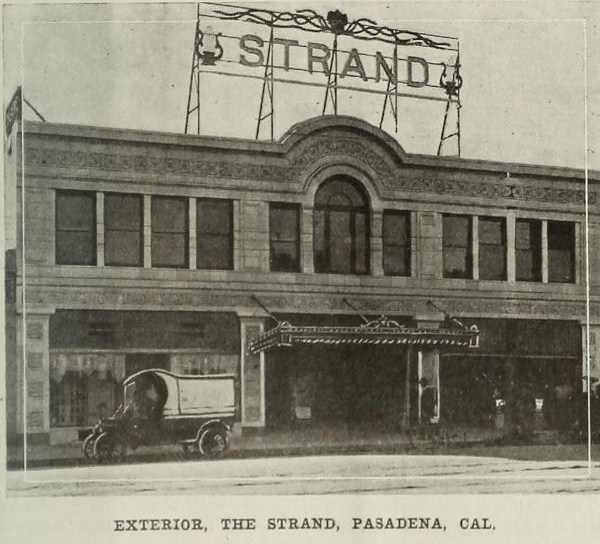 The Strand Theatre was opened November 25, 1914 with Ethel Barrymore in “The Nightingale”. It later became a district 2 Fox theatre. It was closed on March 30, 1956 with Ruth Warrick in “Song of the South” & Margaret O'Brien in “Glory”.

The Fox Strand Theatre is lcoated at 340 E. Colorado Blvd..

According to a notice in the magazine Southwest Contractor and Manufacturer, issue of 6/6/1914, the architects of the Strand were Robert Farquhar Train and Robert Edmund Williams. The offices of Train & Williams were in Los Angeles.

An article in the Pasadena Star-News of 6/14/1924 announced the re-opening of the Strand that night, and said that it had been remodeled to a “Spanish” style.

Since the Strand Theatre is listed in Pasadena I’m sure anyone posting on this theatre link is also aware of the Raymond Theatre in Pasadena. The Raymond is in it’s 11th hour so anyone who would like to show their support to save this historical theatre please come to a Final Design Review hearing on Monday, the 24th at 7 (All Saints Church, Sweetland Hall 132 N. Euclid). To learn more about the Raymond Theatre and its past/present history go to www.raymondtheatre.com Thank you.

One of the organists at the Strand Theatre was Bob Mitchell (best known as the founder of The Robert Mitchell Boys Choir), who has been the organist at the Silent Movie Theatre in Los Angeles since 1990. Late in 1924, the twelve year old Mitchell was hired to play Christmas music between movies at the Strand, and this holiday engagement led to four years providing music to accompany silent movies at the theatre.

Here is an October, 2004 story about Mitchell from the Larchmont Chronicle.

A more extensive interview with Mitchell

Photos showing the Strand are hard to find, so even though the theatre barely shows in this one, it’s the best I’ve yet seen. It’s a view of Colorado Street east of Marengo, with the new Post Office under construction on the near corner of Garfield Avenue in the foreground. The large white building beyond that is the Hotel Maryland,which was at the northwest corner of Colorado and Los Robles.

The front of the Strand can be glimpsed at far right, with its side wall displaying the theatre’s name. The Post Office was completed in 1915, so this dates the photo to about the time the Strand opened. Every nearby building in this photograph, excepting only the Post Office, is now gone.

Another photo showing a bit of the Strand has surfaced: This postcard view from the 1940s. It shows just a bit of the marquee at far right, but it’s only the second photo I’ve ever seen that includes even a part of this theatre.

If this “postcard” view is the same as the one I have in my possession (I could not open the link herein) I have previously dated it to February 10-12, 1949. The movie shown on the marquee was ‘One Sunday Afternoon’ starring Dennis Morgan. (Researched at the Pasadena Star-News archive in the main library.) I grew up in Pasadena and saw many movies at the Strand, the first in 1954, when I was in the third grade. The Strand was torn down, along with most all of the other buildings on the block, to make way for the Plaza shopping mall, which has since made way for the Paseo de Colorado shopping mall. The Strand sat just a few doors west of Euclid Ave. The entrance stairs to the new movie-plex at the current mall, marks the approximate location of former Stand Theater.

Roger G: Sorry it took so long for me to get back to t his page. My e-mail service quit sending notifications from Cinema Treasures and I haven’t gotten around to changing my address, so I don’t know when I get replies.

Anyway, the photo link still works for me. Maybe Flickr was sown when you clicked it. Just in case it’s some other problem, here’s the bare link:

From your description, it does sound like the same postcard.

A lobby display promoting war bonds is the main feature of this 1945 photo from the Pasadena Digital Archive. Not much of the theater can be seen, but it looks as though some remodeling had been done which left the lobby rather plain. The subsequent photo in the stream shows a military band posed in front of the Strand’s curtain, but the most interesting thing is that there appears to be an organ console in the orchestra pit.

Saving the best for last, Pasadena Digital History now has four vintage photos of the Strand available from the Harold A. Parker collection at the Huntington Library:

A 1924 view of the auditorium including what could be the same organ console that appears in the 1945 photo;

A 1929 view of the front, the marquee advertising movies starring Vilma Banky and Charley Chase.