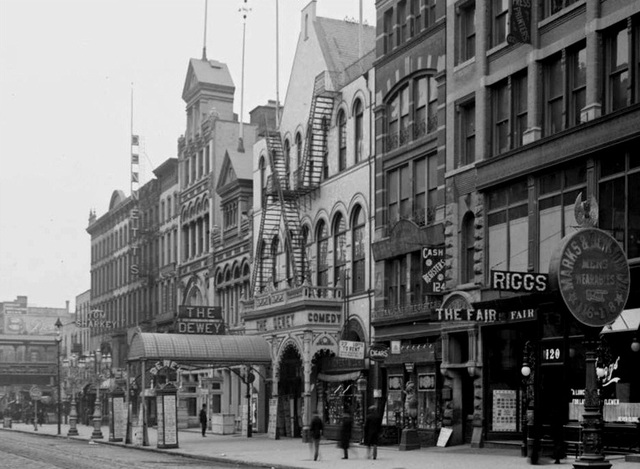 Converted from a church and named in honor of a hero of the Spanish-American War, the Dewey Theatre first opened in 1898, with vaudeville and burlesque. The Dewey was owned by Timothy Sullivan, a major player in Tammany Hall politics, and Geroge Krause, who managed the theatre. In 1908, they leased the Dewey to a rising showman named William Fox for what was then a record price for a theatre of that size–$50 per day. Fox gave them a check for $3,500 to cover the first ten weeks.

Charging ten cents for all seats at all times, Fox presented programs of six acts of vaudeville and eight reels of movies (features were then in infancy). At least partly due to its strategic location near Union Square, Fox’s Dewey became a gold mine, with an average daily attendance of 9,000 and setting an all-time record of 16,800 on a national holiday on February 12, 1910. During the summer months, the Dewey boasted of being the coolest place in town, thanks to 25 fans on the ceilings and walls. During the vaudeville turns, the fans had to be switched off because the noise drowned out the performers.

Sullivan and Krause were so delighted with attendance at the Dewey that they leased another of their theatres, the Gotham in Harlem, to William Fox, with an equally successful outcome. Fox’s profits from the Dewey enabled him to become a partner-owner with Sullivan and Krause in a new next-door neighbor called the City Theatre, which opened in April, 1910 as a playhouse but soon switched to vaudeville and movies.

Around that time, William Fox also bought the operating lease of the huge Academy of Music on the opposite side of 14th Street, where for a time he presented plays with a resident stock company before changing to vaudeville and movies. By 1916, the Dewey had been declared a safety menace due to faulty construction work when it was converted from a church. The building was sold and totally demolished, with new owner Solomon Schinasi selling the lease on the underlying round to William Fox for the next 44 years.

Fox announced that he would build a spectacular new theatre on the site, with Thomas Lamb as architect, but nine years passed before that happened. When the New Academy of Music opened in 1926, it used the same street address as the Dewey Theatre. And today, both theatres are no more than memories.

Leon Schinasi was my grandfather and his father was Solomon!