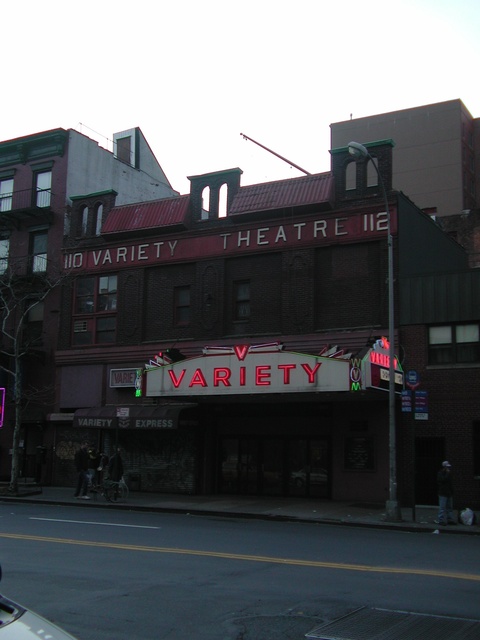 Opened as the Variety Photoplays, the venue began as a nickelodeon near Manhattan’s Union Square.

During its almost 90 year history, the theatre went from first run films to adult movies and finally to off-Broadway theatre.

The Variety Theatre served as a location for Martin Scorcese’s “Taxi Driver” during the scene in which Robert DeNiro’s character first meets Jodi Foster’s. It is also located, coincidentally, around the corner from the setting of the film’s final scene and shootout.

In October of 2004, the Variety Theatre’s owner, 110 Third Avenue Corporation, closed the theatre after operating it since 1991 and in June of 2005, the theatre was torn down.

I never went to this theater, but remember looking in the open door of the old man’s bar next door, complete with old men’s old dogs asleep next to their bar stools. Probably could get a short beer for fifteen cents.

He guys, found your wonderfull web site. Stayed in NYC from 1989 until 1991. One day on my way to work I have got the chance to take a couple of picturs from the inside of »Variety Photo Play« at 110 Third Avenue – before they reopend. You can see the pictures (album) on my »Flickr account«, look for »friedrich_berlin«. Best wishes from Berlin town, Uwe.

Can you get the photos on this site. Flickr accounts tend to be unavailable in time.

Here’s a direct link to Uwe’s most excellent series of images. Thank you, sir, for documenting this historic building just before it would have been too late!

I lived in NY for a short time in 1995. I lived on 22nd St between 1st and 2nd Ave. On the weekends I would walk through the East Village, via 3rd Ave. I remember the 1st time I saw the Variety Theater. It was modest and practical. It was a theater that looked just that, a theater, nothing ornate or remarkable about it. I had never even stepped inside, yet each time I passed it on my weekend walks, I felt a sense of wonder about this place. Can’t explain why. I would imagine all the history that was made there in years gone by. One day while walking with a friends, I spotted Valerie Harper standing in front of the theater, she had been doing a play. Being huge Rhoda fans, we got her autograph. One of the fondest memories I have from living in NY is walking past the Variety. I miss the its shabby splendor,its name in lights and reading the marquee.

It’s not completely accurate to say this theatre went from first run movies to adult to off Broadway. Here’s the scoop that I can personally attest to. I was going to school and/or living in the West Village during the 70’s, 80s and early 90s. I’ve always been fascinated by these old theatres and the East and West Village was full of them during this time.

First of all you paid at a stand alone booth outside of the theatre manned by a guy with so much grease in his hair that if he moved quickly, the grease would splat on the window of his booth!

Then you walked inside, which was very very dark. Just inside the door, to the right, was a small counter area with candy and such, and a woman who took your ticket. I swear this is true — standing outside of the counter as you entered was a big bruiser with a thick and long long motor cycle chain around his neck! I still don’t know why he was needed. Were there lots of fights?

Then you enter the theatre. It was very ornate. I don’t know if the balcony was still in use. I never went up there because the orchestra section was never even remotely full. The audience was made up of mostly over weight bald men smoking cigars (yep—they still allowed smoking!!!) The place reeked of cigar, in fact.

Now check out this part — and again I swear this is true — right before the first feature started, two scantily clad women would walk done either aisle saying “Last chance! Last chance before the film!” These were clearly “working” girls and I would always try to avoid eye contact with them, for fear they’d try to solicit me.

In all the many times I went to the theatre for a double dose of some weird horror films, only once did I see a guy go with one of these girls. They walked toward the screen and left through an emergency exit next to the screen! The guy never came back out! I still wonder what happened to him!

I loved going there because it was pure grind house. In fact it was more grind house than 42nd street because these films were completely unknown — and I know my movies. I remember one film was about some mother and daughter running thru the forest away from some killer and the daughter had a doll. About 45 minutes into this movie there was a jump and a badly made splice in the film. Then suddenly, it was a completely different movie!! The only common element was there was also a doll in this other film! Just nuts!!!

I’m convinced that during this period the theatre must have had some sort of mob connection. It was just too shady and full of very unsavory characters like the motorcycle chain guy and the working women.

So then around 1989/1990, the movie theatre closed and later reopened as a legit live performance space. I so looked forward to seeing the restoration of the beautiful ornate structure. I was so excited about it that I got tickets to the very first performance of the re-opened theatre! What a let down! They completely gutted the place down to the brick walls. Everything was gone! I was so saddened. That movie theatre should have been declared a landmark and preserved. Last time I looked, it was demolished and turned into condo.

PS If you want to get a sense how seedy this joint was, get your hands on a copy of the 1983 movie, Variety by Bette Gordon. The film is set in Times Square, but the theatre they used for the movie is actually the Variety Photoplays. It’s not a great movie, but you’ll get to see quite a lot of the theatre in all it’s seedy grandeur.

I’ve been in NYC since 1982 and walked past this theatre easily a hundred times back in the day. It’s one of my great regrets that I never patronized the place — I was more easily intimidated back then by places that looked a little rough.