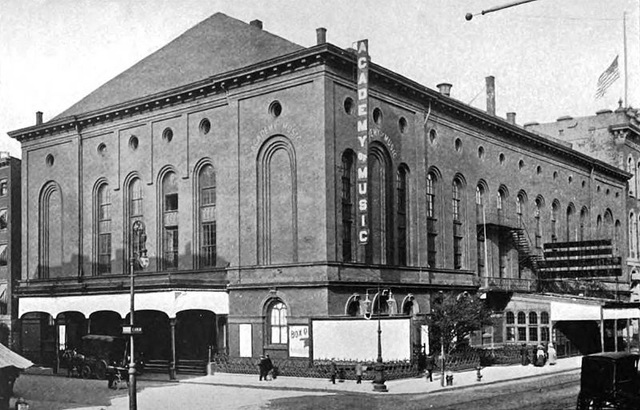 New York City’s first Academy of Music spanned two centuries, opening wih grand opera in 1854 and being operated by William Fox from 1910 until demolition in 1926. The original seating capacity was reported as 4,000, but after a serious fire in 1866, the theatre went through a series of rebuildings and renovations that gradually reduced it to about 2,500.

When William Fox first took over the Academy’s lease, he presented only stage plays with a resident stock company. As soon as feature-length movies became the vogue, Fox switched to films, supporting them with vaudeville to counter fierce competition from neighboring theatres. Fox also moved the entrance from Gramercy Place to E. 14th Street, which provided more space and better visibilty for the marquee and other electric signs.

When the Consolidated Gas Company purchased the site for an addition to its nearby headquarters, William Fox built a new theatre directly opposite at 126 E. 14th Street and named it in honor of the demolished Academy of Music. The second Academy met a similar fate, being demolished in 1997 for another of NYU’s student dormitories in the area.

The first Academy of Music was the most prestigious theatre for opera in New York prior to the opening of the first Metropolitan Opera House. It’s listed in the 1897-98 edition of the Julius Cahn Official Theatrical Guide. At that time it was under the direction of E.G. Gilmore and Eugene Tompkins. The latter was also director of the Boston Theatre on Washington Street in Boston. Admission prices ranged from 25 cents to $1.50. Seating capacity: Orchestra- 498; Orchestra Circle- 436; Balcony- 508; Second Balcony- 150; Gallery- 518; Total: 2,110. The theatre had both gas and electric illumination. The proscenium opening was 44 feet wide X 40 feet high, and the stage was 66 feet deep. There were 15 in the house orchestra. In Frank Leslie’s Illustrated Newspaper of Feb. 21, 1880, there is an interior drawing made during the Masquerade Ball of the Liederkranz. That drawing, showing the very elaborate interior, plus an exterior photo shot around 1865, are in the book “The Liederkranz of New York, 1848-1948” published in NY in 1948.

A large scale photo of this theater taken during a blizzard in January of 1908 is shown at this site:
http://www.shorpy.com/node/2950?size=_original

Visited this theater a lot when my RKO 23rd Street closed in 1960. Saw my first concert here in 1964. Dave Clark 5 and The Kinks. In the 70s, it would become a rock concert hall.

42ndStreetMemories – You’re on the wrong page – this page is for the first Academy of Music which was demolished in 1926. There is a seperate page for the second Academy, which is the one you remember. -CT theatre # 1301. There are a ton of comments there.