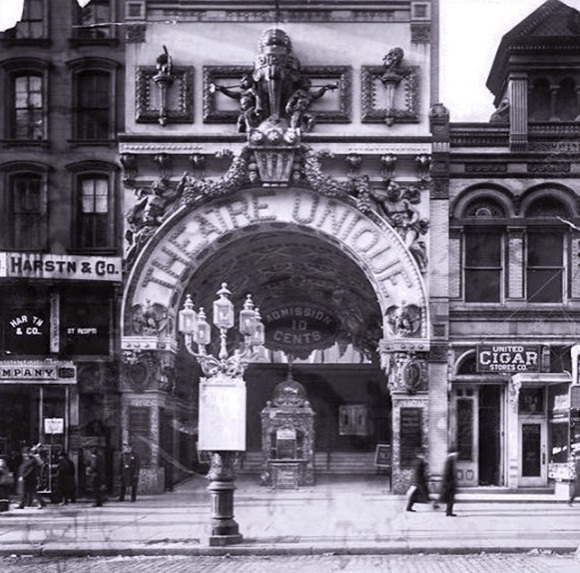 The Theatre Unique truly lived up to its name with its presentations and spectacular entrance on the south side of E. 14th Street, directly opposite Tammany Hall. Built around the turn of the twentieth century, Theatre Unique started as a penny arcade with a small stage where vaudevillians performed to draw crowds.

It was one of the first places in Manhattan to present movies via projection, which meant renovating the interior into a conventional auditorium with seats and fully-equipped stage, to the plans of architect S.S. Sugar. For an admission of ten cents, patrons could see several acts of vaudeville and ten reels of the latest movies. Mostly of short duration, the films were usually so new that Variety and other trade journals sent reporters to Theatre Unique to write reviews for their next editions.

Nearby competition from the Dewey, City, Jefferson, and Academy of Music eventually forced the closing and demolition of Theatre Unique. Its underlying ground, as well as that of the demolished Dewey Theatre, was incorporated into the plot used for the New Academy of Music that opened in 1926.

Oh, and I don’t know that you’d call it vaudeville proper, but I’ll bet that amongst the shenanigans at Tammany Hall, there were a number of private and intimate, er, burlesque-style performances given for the pleasure of certain political big wigs!

Regarding my last post…“No Applause – Just Throw Money”, the book that made vaudeville famous by Trav S.D. has on the first pictures section, 2nd page on the bottom, a photo of Tammany Hall with the caption, “New York’s Tammany Hall was home base to no less than two major vaudeville managers. Tony Pastor’s theater was located right in the building. Tammany politician "Big Tim” Sullivan was to start one of the premier circuits of the Pacific Northwest with his partner John Considine."

There you have it.

Sorry, off topic here, but Warren, just because a modern-day vaudevillian who wrote the most complete vaudeville retrospect who goes by a stage name, you write him off. I don’t think that’s fair. What about Dr. Seuss? Do kids write him off because he didn’t put his real name – Theodor Seuss Geisel? No.

“Anyway, Trav S.D.’s writing on theater, art, politics, and culture has appeared in The Village Voice, American Theatre, Time Out New York, The New York Sun, and Reason, among other publications. His plays have been produced in venues throughout New York City and across the country, and since 1996 he has been top banana at the American Vaudeville Theatre. By day, as Travis Stewart, he toils as a mild-mannered director of development at Theater for the New City (NYC). He lives in Brooklyn.”

The 1934 Film Daily Yearbook shows a STAR theatre at 136 Third Avenue with 290 seats as well as the larger Lexington STAR location. Does anyone have any more info on this?

An article titled Light and the Moving Picture Show appeared in the February, 1908, issue of a trade journal called The Illuminating Engineer. Several paragraphs are about the Theatre Unique, though for some reason the magazine chose to call it by the slogan that appeared on its vertical electric sign, “The World in Motion” instead of by the name arched over its entrance. There is one photo of the theater, but it is only a daytime view so we don’t get to see the lighting which the article describes so admiringly.

Among the details about the house the article reveals is that the main floor seated 514 patrons, and there was a mezzanine that provided an additional 150 seats. Admission to the main floor was ten cents, but a seat in the mezzanine cost twenty cents.

Following this thread (and not the Theatre Unique) this photo shows that the Olympic Theatre was indeed located inside the Tammany Hall building as stated by several sources.

I ganked an 1893 photo off the web, which has a Star Theatre in the background identified as being at 14th & Broadway. I was only able to find a 1901 World Almanac record of a Star Theatre at Broadway & 13th Street with a seating capacity of 2000, under Opera Houses & Theatres. If anyone knows if the Star was converted to film, and where it may have been I will post the photo accordingly. I thought it was possibly a prior name of the Theatre Unique. But the seating capacity was far larger for the Star.

Well, never mind. the Star Theatre was at 844 Broadway, pcitured at the top of the Wallack’s Theatre Wiki page. Appears to have closed in 1901.

The July 3, 1909 issue of Real Estate Record and Builders' Guide ran this brief item about an expansion of the Unique Theatre: