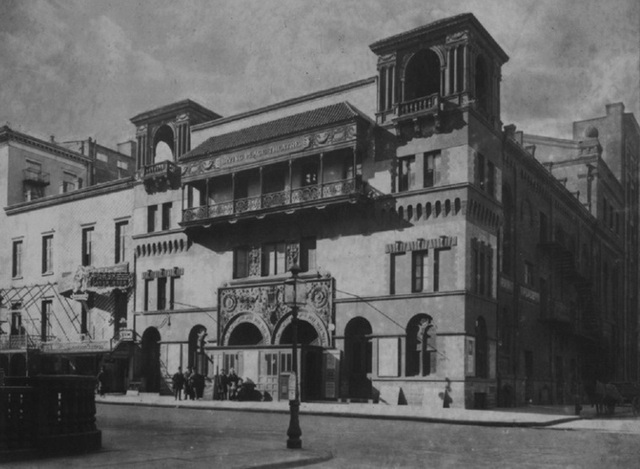 Built on the site of an earlier Irving Hall(1860), Amberg’s German Theatre was designed by Theodore C. Stein and Emery Roth (the latter was to become one of Manhattan’s greatest apartment house and hotel designers). It was showing movies in 1916 and again from 1930 to 1952.

From a 1948 ad this appears to be an art cinema. The features were “To Live In Peace” and “La Boheme”. It is listed in a block advertisement with a theatre called the New Hopkinson Theatre in Brooklyn.

Waltz Time – Story of Old Vienna when the waltz was naughty – (Gay and lilting – N.Y. Post) and The Marx Bros. in “Monkey Business”, then it reads, Held Over “The Liberation of Vienna.”

Historically speaking, perhaps all, or especially “The Liberation…” might have been deemed attractive fare for those who would have read the Daily Worker then. The border of the ad is of a musical score with a dancing couple; clearly the main attraction over “Monkey Business.”

The Irving Place was a double features subrun arthouse from 1941 to 1950 with a heavy emphasis on Russian films during the war years.

Bob Marshall -
“I recently walked passed this building, which now bills itself as ‘The Fillmore at Irving Place…’”

This theater was between 14th and 15th streets, at the southwest corner of 15th and Irving, across the street from the Con Ed building. It was demolished years ago to build the miserable Zeckendorf Towers, which now stands on the spot (and also blocks the former “3 towers view” you used to be able to see from the East Village, of the Con Ed, Met Life, and Empire State buildings).

The theater you saw was Irving Plaza, on the northwest corner, which has been a punk rock venue since the seventies (at the start of that time, it was essentially a Ukrainian wedding reception hall that hosted an occasional concert).
I would be interested in knowing the original name of the Irving Plaza, as I’d like to look it up here…

The Irving Place is often crediting for starting the first domestic Film Festival in 1942, a tribute to films from our allies.

This German/Yiddish/Russian/Burlesque house also attempted to be the first Italian film cinema in NYC in 1939.

To claify some confusion, Irving Plaza, the former punk rock emporium, was across the street, on the north side of 15th street. The Irving Place Theatre was on the south side, between 14th and 15th Streets along Irving Place across the street from the Con Ed building. At some point the entrance to the theatre evidently was transferred to 14th street. I think in its last incarnation it was a warehouse for S. Klein’s department store on Union Square. I remember when I lived on 17th and Irving, I used to walk to the subway on 14th Street and wonder why on the facade of the building were the masks on drama and tragedy. That was all the basically was left on Irving Place to indicate that the building was once a theatre. It was finally torn down in the 1980s and replaced with Zeckendorf Towers which one poster above summed up accurately as “miserable.” It still is.

jedidiah & MDchanic term the Zeckendorf Towers miserable – no quibble there. But what to make of the soulless pile of an NYU dorm on 14th Street a block and a half away that replaced the Palladium, née the Academy of Music? Architectural genocide in Manhattan that continues unabated.

“…what to make of the soulless pile of an NYU dorm on 14th Street a block and a half away that replaced the Palladium, née the Academy of Music?”

Don’t even get me started on the Palladium / Academy of Music. … or Variety Photoplays on 3rd, or the Jefferson…

It’s all just a shame.

isn’t this the burlesque house in which the recent play The Nance takes place?