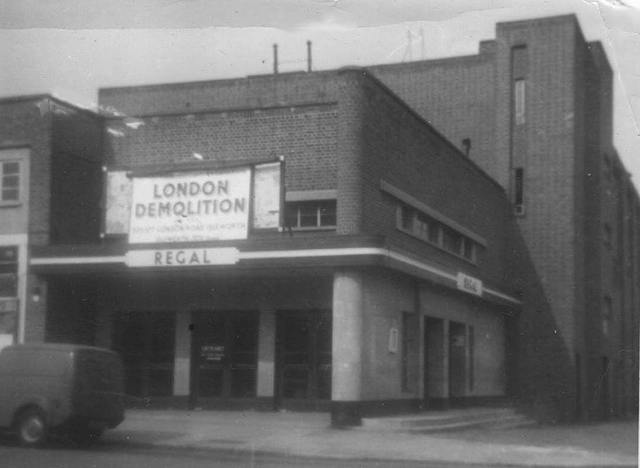 The Regal Cinema was built for Associated British Cinemas(ABC) and was designed by their in-house architect William R. Glen. Seating was provided in stalls and circle levels.

Located in the centre of Twickenham, on London Road, just south of the railway station, it opened on 9th October 1939 with Mickey Rooney in "The Hardys Ride High". The opening was delayed by two weeks due to the outbreak of World War II.

The Regal Cinema in Twickenham had the shortest life of all the purpose built ABC cinemas and closed on 20th August 1960 with Steve Reeves in "Hercules Unchained" and "The Bugs Bunny Show". The building became a rehearsal studio for ABC Television for a while, but was eventually demolished and an office block named Regal House was built on the site, together with a pub named the Rugby Tavern.

I used to walk past this cinema everyday on the way to school. I think I also saw my first film here “Singing in the Rain"
There is a picture of the building here:
View link

and the foyer here
View link

I do have other pictures of this cinema.

A few other comments. The Regal originally had curtains (tabs) that opened sideways but when CinemaScope was installed they replaced the curtains with a curtain that rose, possibly to give more side of screen space for the scope screen. AS there was no fly space an “Austrian” curtain was used which folds up on itself. When the cinema closed it was used for ABC television rehearsals mainly the television series “Armchair Theatre”