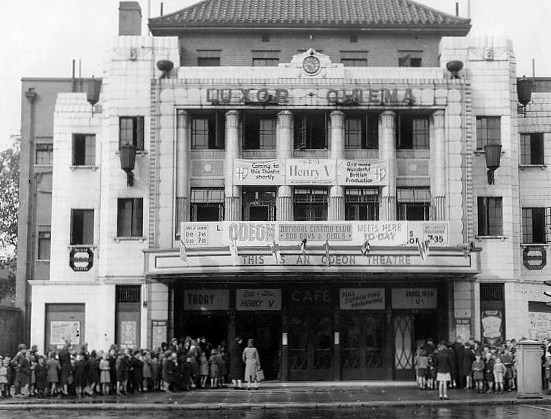 Located in the south-west Greater London district of Twickenham, at the corner of Cross Deep and Heath Road.

The Luxor Picture Theatre opened on 18th November 1929 with Victor McLaglan in “King of the Kyber Rifles”. Built for Walter Bentley, it was designed as a cine-variety theatre with a proscenium 35 feet wide, there was a 17 feet deep stage and four dressing rooms. The theatre contained a mixture of styles, with the exterior being a combination of Egyptian and modern. The Egyptian theme was continued in the auditorium and the foyer was modern.

In January 1944, it was sold to the Odeon Theatres chain and was re-named Odeon in January 1946. The Odeon was closed by the Rank Organisation on 10th October 1981 with Franco Nero in “Enter the Ninja” and David Warner in “Nightwing”. A spectacular organ concert on the Compton organ was held in the theatre, just prior to closing. The theatre was demolished in 1986 and a sports club and bar was built on the site.

I HAVE A SET OF COLOUR PHOTOGRAPHS THAT I TOOK ON CLOSING DAY.
I USED TO GO TO THIS CINEMA EVERY WEEK AS A CHILD DURING THE WAR…
IN THE SCHOOL HOLIDAYS I USED TO “RUN THE NEWSREEL” BETWEEN THIS SHOW “ODEON TWICKENHAM” AND THE OLD “ROYALTY” (GAUMONT) RICHMOND…
I STARTED AS “TRAINEE PROJECTIONIST ” AT THE ROYALTY IN 1948.

A 1971 exterior photograph of the Odeon Twickenham here:
View link

You can see some pictures of the Odeon Twickenham inside and ouside, plus demolition on the link below (there is also the Regal and Gaumont Twickenham on this link)

I was interested to see the photographs at the geocities site, particularly the pictures of Anne Ziegler and Webster Booth singing in the theatre in 1979.

I am writing a personal memoir about Anne and Webster and would be most interested if anyone can tell me more about the concert.

My blog on Anne and Webster can be found at http://duettists.blogspot.com

herewith another set of pictures

I believe that, for a short while at least, the cinema was considered as a possible new home for the Musical Museum collection from Brentford. The Museum has now moved to a purpose built location a few hundred yards from its former home.

The link I posted above in 2005 at geocities is now defunct.
Here is the new link to the same site containing pictures of Twickenham Odeon.
http://www.john.byethost6.com/odeont.htm