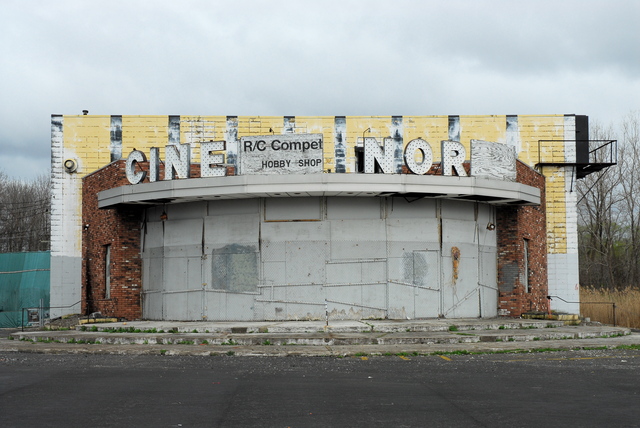 One of several 1960’s modern theatres built by Carrols Development Corp., this one in Mattydale, north of Syracuse, opened on December 25, 1965 with Doris Day in “Do Not Disturb”. The Cinema North was built just to the right of the K-Mart store in the Northern Lights shopping center.

First run engagements included the 1968 roadshow engagement of “Oliver!” and the area premiere of “The Exorcist”.

The Cinema North was closed in 1990 and building stood vacant and neglected for years until it was demolished August 1, 2017.

I was the relief projectionist in this theatre (as well as the Genesse, the East, the Westvale, and the North and Dewitt D.I.s) for a few years in the early eighties, while a fine old gent named Gary Bender was the head, and it was a delight to work in. The booth had two Simplex E-7 projectors that Gary kept in immaculate shape, older carbon-arc lamps, mono sound and an eight-track player for non-sync music. In the room down the hall from the projection booth was a huge popcorn popper that was used by CinemaNational to pop the corn for all the theatres in town. Whenever I went upstairs, there were large garbage bags full of popped corn in the hallway. About 1981, when the 3-D film craze re-emerged for awhile, the screen was painted silver to accommodate the process. I remember I ran * Parasite, Cominâ€™ At Ya, House of Wax * and a few other 3-D pictures here. I wish I could remember the managerâ€™s name from this era, I recall that he was another fine old veteran.

CinemaNational folded and the theatre changed hands several times after I left. At the end, it was leased from Northern Lights by a local contractor named Dan (I canâ€™t remember his last name) who also leased the Genesse and the Auburn Twin and still kept them running for awhile. Eventually he wanted out, and I had a brief conversation with him about buying the business and assuming the leases, but it didnâ€™t pan out. Shortly after that the end came, the building was cleaned out, and a giant R/C slot-car track took over, which folded quickly.

I am in NY for the foreseeable future, but you are welcome to get in touch with me. Be advised, though, that the part of my brain that holds my memories of this period has pretty much shut down for good. But I’ll remember what I can for you. My e-mail is mcogdenAToptonline.net.

The Cinema North opened in December 1965 with “Do Not Disturb” with Doris Day and Rod Taylor.

It is a true testament to how cheap the Slotnicks were that they built this nice nearly 800 shopping center theatre and then put old time used E-7 projection equipment in it.

Uploaded the December 25th, 1965 grand opening ad in the photo section for this cinema.

2803 Brewerton Road is the address. Plans are in the works to demolish the theatre and build a hotel on the site.

Every web site I’ve seen but Cinema Treasures places the Cinema North in Mattydale, not Syracuse.

The theatre was demolished this morning at the order of the Town of Salina. http://www.syracuse.com/news/index.ssf/2017/08/ex-cinema_north_theater_in_mattydale_demolished_after_sitting_vacant_for_decades.html#incart_river_home

Herbert Norman Slotnick of Syracuse had worked in his father’s theaters after he returned from active duty in World War II including fighting in the Battle of the Bulge. With his wife, Joan, they expanded Slotnick Enterprises building suburban theaters and drive-ins under Drive In Management, then Carrol’s Drive-Ins, Carrol’s Cinema’s, and Cinema National branded locations. This project was announced simultaneously with a theatre in DeWitt in 1965.

The Kmart Plaza housing the proposed theatre had opened November 7, 1963. An addition to the plaza was announced in 1965 - and on the boards of Todd & Giroux Architects - as the Northway Cinema, promising 70mm projection, roadshow presentations, and stereo sound. The venue opened as the new Cinema North on December 25, 1965 on a 25-year lease with the feature, “Do Not Disturb.” It was operated by Carrol’s Development Corporation, Cinema National, and USA Cinemas. It was closed at end of lease by its final operator in 1990. It was used for other purposes briefly but remained vacant for a prolonged period falling into disrepair. It was mercifully razed in 2017.