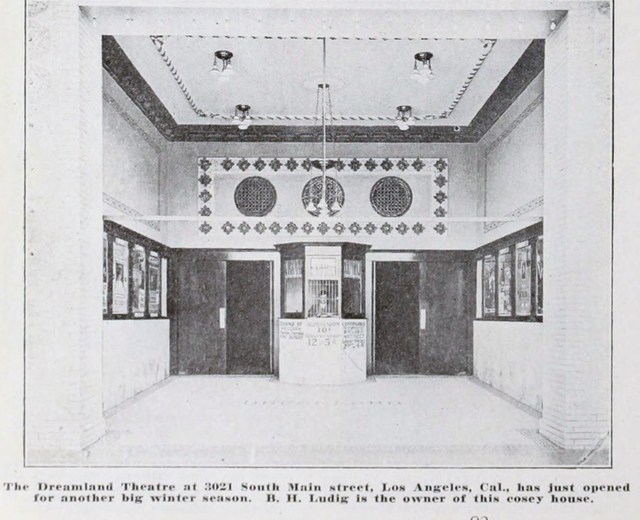 The Dreamland Theatre was opened in 1912. One of many independent theaters in the South Main Street area of downtown Los Angeles.

The Dreamland Theatre was located at 3021 S. Main Street.

There were a handful of theaters today that are listed as demolished but are still standing. This is one of them. It’s some kind of factory, as you will see when I post the pictures. Status should be closed.

This building was erected in 1917, according to a report generated by the city planning department’s zoning information and mapping system.

I drive by this place all the time and I never see anything going on. I would really like to go inside and see what’s left. Same with the Gentry in South LA. Maybe I should pose as a salesman.

The information about properties in the City of Los Angeles is available from two sites- ZIMAS, the City Planning Department’s information service, which shows it both on a web page (with a map) and in a .pdf file report, which will have an entirely different type face; and the L.A. County Assessor’s parcel viewer (a somewhat cranky site.) Dating info at both sites comes from the Assessor’s office.

Everything at both sites appears to be digitally generated from a database, but the database itself might have been generated from scans of original documents by some sort of document reader program. The database gets updated whenever there’s a change in a parcel’s status, which is probably done by keyboard entry. There are definitely some mistakes in the database, though I’ve only found a few I know to be wrong. The system appears to be reliable at least 99% of the time.

Here is an aerial view from a few years ago. The building at the northwest corner of 30th and Main is new as it doesn’t show up in aerial photos from the 1940s and 1950s. The remaining three buildings have been there going back to the 1940s. I’m not sure which one was the theater building at this point.
http://tinyurl.com/ybhctum

The Dreamland Theatre is listed at 3021 S. Main Street in the 1915 city directory, so the County Assessor’s office was wrong about this building having been built in 1917, unless something happened to the original building and it was rebuilt that year. I suspect it’s most likely that a document reader (human or digital) misread 1912 as 1917.

The Dreamland was most likely this project noted in the August 24, 1912, issue of Southwest Contractor & Manufacturer:

The stores with their plate glass windows have been walled up, but otherwise the building remains pretty much as described in 1912.