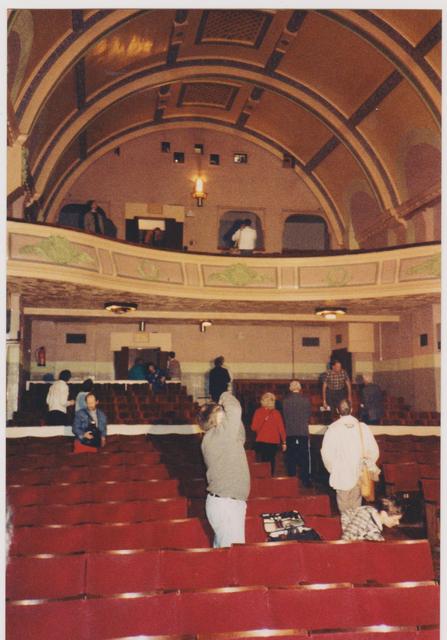 The Paignton Picture House opened on 16th March 1914 and was designed by local architects Hyams & Hobgen. Located adjacent to the railway station, the exterior of the building is in a Classical style with a pediment arch over a centrally placed bow window which is set in a recess. Inside the auditorium seating for 575 was provided in stalls and circle with three boxes located at the rear of the circle. The auditorium is high and has a deeply curved barrel ceiling.

In 1933 some modernisation was done to the auditorium and the seating capacity raised to 600. This modernisation appears to be have been of minimal impact on the original decoration of the building which retains almost all its features since its initial opening.

From around 1947 it became known as the Picture House and continued as an independently operated cinema, becoming the Torbay Cinema in 1968.

From 20th February 1991 it was declared a Grade II* Listed building, having been taken over by the adjacent Dart Valley Railway company in 1987 with the view to enhance the ‘period’ experience of having an Edwardian cinema next to the historic operating steam railway. Sadly the cinema was closed down on 26th September 1999 with a special showing of Bill Travers in “The Smallest Show on Earth” plus a variety show on the small stage. Its demise was caused by the opening of the nine-screen Apollo multiplex in Paignton.

The railway company intended to convert the Torbay Cinema into a booking hall for their steam railway attraction, but this use has been blocked by preservationists and locals who would rather it be used to screen movies (perhaps transport films depicting the age of steam railways) would be a better option than exists at present with the building sitting empty and unused.

For many years, authoress Agatha Christie was a patron of the Picture House. She used to sit in row two, seat 2 in the circle. In many of her books, when the ‘Gaiety Cinema’ is mentioned it is actually the Torbay Picture House.

Shot of the screen from the rear stalls here:–

I knew the manager of the Torbay Picture House, John Mann. It was opperated by Reel cinemas until it closed. I was there on the final night, very sad indeed it was too.

The demise of the cinema was due to only short term leases being granted by the Torbay Steam Railway, so very little could be done by way of investing money into the site by the operators.

It was thought that the Apollo Cinema would be agreeable to operating the Torbay PH as an extra traditional screen, mainly for re-runs of older classics possibly, and for when a really good modern film came along, and the extra large auditorium was needed… this was not to be though, as the railway were determined to close the cinema, and as has been mentioned, convert the hall to a booking office and shops…

Listing was the only saving grace for the Torbay PH, but the building is starting to deteriorate….

Now in the hands of the Paignton Picturehouse Trust

Ken, I see no mention of the Regent cinema in Station Square, Paignton. I can’t seem to find the facility here to add a cinema? Bob

bobtomgrim: I have added a page for the Regent Cinema. Please let me know if you have any further details.