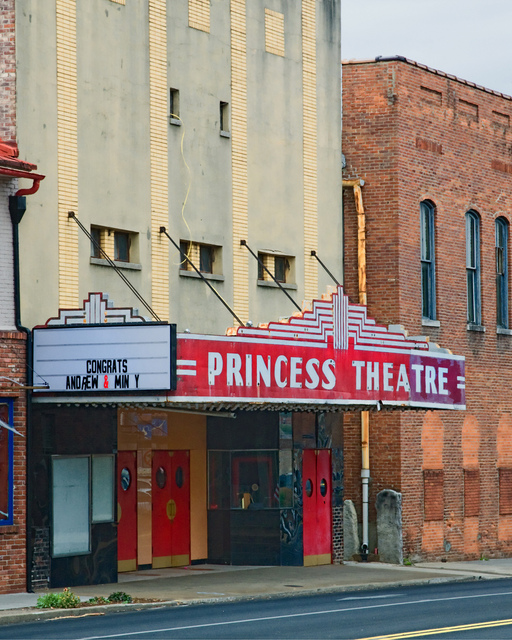 It was rebuilt, but suffered another fire in 1942, and was remodelled in an Art Deco style. It closed as a movie theatre in 1972. Today it is a restaurant and lounge.

This web page has a brief history of the Princess Theatre. It was called the Photoplay Palace when it opened in 1911. The Moderne facade is the result of reconstruction following a major fire in 1942. The Princess closed in 1972.

The text should be adjusted to show that this opened as the Photoplay Palace. By Feb 1913, it’s shown as the Princess.

The 1942 fire was the second major conflagration in the Princess’s history. The July 6, 1918 issue of Moving Picture World reported that the house had burned to the ground on Monday, June 10. A booth fire was the cause, and though the projectionist was burned slightly, the audience filed out calmly and no one else was injured. The loss to building and equipment was estimated at $17,000.

A second item in the same issue of MPW said that the Crescent Amusement Company, operators of the house, had moved scheduled shows to their second Hopkinsville house, the Rex Theatre, and that the owner of the building, L.H. Davis, said tat the Princess would be rebuilt immediately, and that Crescent would continue as operators when it reopened.