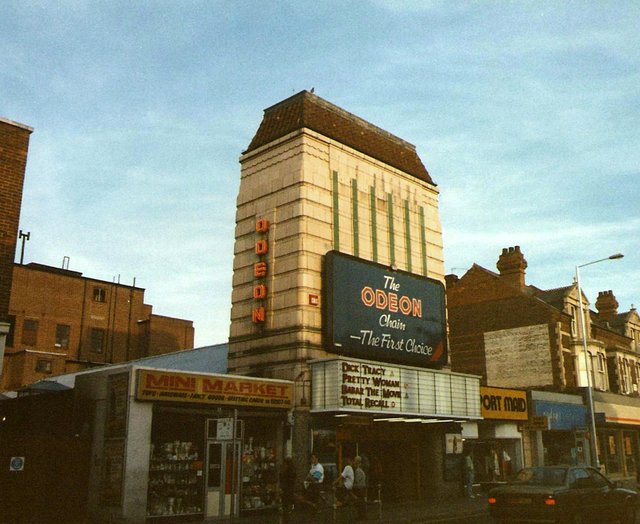 One of the original Oscar Deutsch chain of Odeon Theatres. The Portsmouth Odeon opened on 14th December 1936 with Sydney Howard in “Chick”. It was the largest and most expensive Andrew Mather designed Odeon of that year. Total seating was provided for 1,824, with 1,224 in stalls and 600 in balcony.

It has an impressive monolithic tower frontage in cream faience with vertical green bands and a roof of red Spanish tiles. The auditorium’s ornate decoration included tall murals on side walls depicting film subjects.

A two week closure from 10th September 1960 for modernisation, including installation of 70mm with new wide screen and proscenium in front of original. Then began a glorious period through the 1960’s of almost uninterrupted Roadshow presentations (with the Gaumont almost opposite taking the Rank first-run weekly release).

In 2007 the Freehold on the building was sold by Odeon Theatres Ltd. and after a few false roumors of closure, the final performances were held on 10th January 2008. Demolition is possibly the final act, still to be played out…..but, in December 2008, the foyer was in use as a OJ’s Discount Store and by August 2013 was in use as a Sainsbury’s Local supermarket. The auditoriums remain unusued.

A current photograph can be found here:–

A legend closed in Portsmouth tonight. Will Smith’s “I Am Legend” was the last film screened. The next action will be demolition for yet more shops and flats. Closure was originally scheduled for 15th November 2007, but a couple of reprieves with a bumper Christmas program kept the landmark building open into this new year. With fond memories of superb 70mm presentations through the sixties, such as: “Lawrence of Arabia”, “Doctor Zhivago”, “The Sound of Music”, “Cleopatra”, “Those Magnificent Men …”, etc., it’s goodbye to a another piece of UK cinemas history.

I cannot believe that Portsmouth City Council will alow this building to be demolished – Northend will never be the same without it. Surely it should be listed – as should the Carlton at Cosham? So many buildings like this have already been lost and these are the very last surviving ones in Portsmouth. The only cinemas left now are modern multiplexes in Port Solent and Gunwharf. Multiplexes are not real cinemas.

Many happy memories of this place, my regular haunt as a teenage lad from 1990 until 2001 when I moved away from the Portsmouth area. It’s very sad to hear of the Odeon’s demise – inevitable after Gunwharf opened I suppose. Modern multiplexes may have their advantages (I’m as guilty as the next person of using them) but they have no soul or character – the Odeon North End had both of these in abundance.

BTW Some great pictures posted here of the Odeon in her better days!

The foyer is now a Sainsburys. Absolutely nothing of note is visible in there.