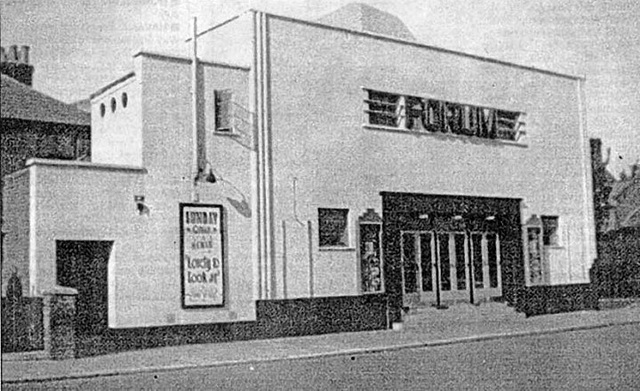 Located in the Stamshaw district in the north of Portsmouth, Hampshire on Stamshaw Road near the corner of North End Avenue. The North End Cinerama was opened in December 1912. It had 312 seats. In the 1920’s it was re-named North End Cinema and by 1927 was re-named Empire Cinema. It was closed on 30th April 1938 for a complete modernisation.

This was carried out to the plans of architect Robin A. Thomas who modernised the façade into an Art Deco style and increased the seating capacity to 527 with a 22ft wide proscenium. It re-opened as the Forum Cinema on 8th September 1938 with Glen Morris in “Tarzan’s Revenge” and Will Hay in “Oh, Mr Porter”. CinemaScope was installed in June 1955, but it was closed in 1959 and was converted into a furniture store. It was later demolished and flats were built on the site.