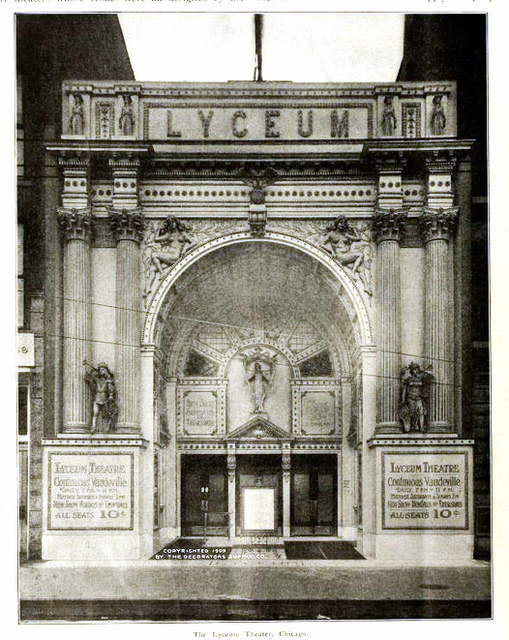 http://hdl.loc.gov/loc.pnp/cph.3b38423 has a photo of what is presumably this Lyceum theater.

From the Chicago Tribune of August 2, 1908 —– In The Theaters … Vaudeville Bills:

“The Lyceum, a new low priced vaudeville house at Thirty-Ninth street and Cottage Grove avenue, opened last evening. The opening bill included Sophia Everett and and company in a comedy sketch, Lottie Wilson, a soubrette and others. The theater, which seats 600, will introduce the innovation of changing its bill twice a week.”

I’m trying to find more information on the Lyceum Theater of Desplaines Street to see if it’s the same as that in the Library of Congess photograph.

This seems to be the correct photo for the Lyceum on Cottage Grove. They bought their decorations from the Decorators Supply Co. on Archer Ave.

Why would the Library of Congress photograph necessarily be that of the Lyceum Theater at 39th & Cottage Grove rather than the one at Desplaines & Madison? That they bought decorations from Decorators Supply Co. on Archer Ave. really proves nothing.

The Decorator’s Supply Catalog of 1910 shows this photo and this address. Has nothing to do with the Library of Congress photo, other than it matches.

Thanks. Where can I get that catalog?

The September 16, 1911, issue of The Moving Picture World listed the Lyceum Theatre on Cottage Grove Avenue as one of four large neighborhood houses in Chicago that had substituted movies for vaudeville during the summer, but were continuing to show pictures for the fall.