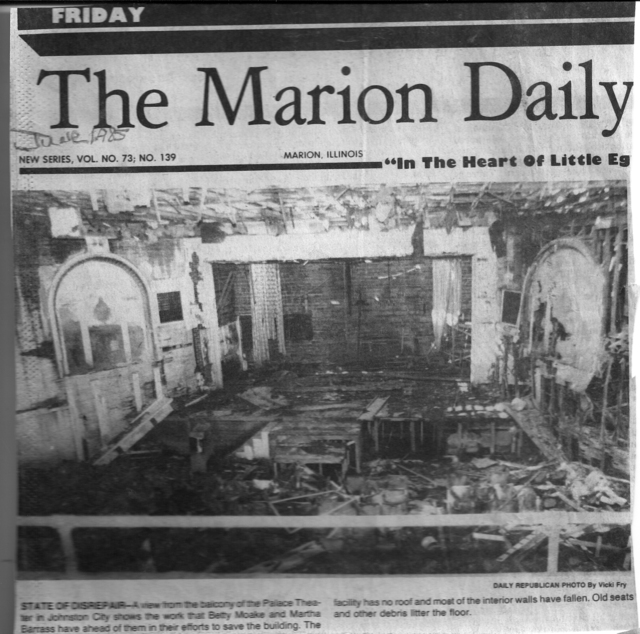 Here is part of an article in the Southern Illinoisan, dated 11/12/71:

The Palace Theater, once dubbed the “outstanding showhouse of the area” during the peak era of indoor theaters, was transferred Thursday to the Johnston City Unit One School District. The theater will be used for echool and community cultural activities. The name has been changed to the Robert Cluster Memorial Theater.

Mrs. Robert Cluster of Hollywood, Fla,, and her sons, Stewart, a circuit judge in the First Judicial District, and Loren, a Florida stockbroker, presented the theater, in the 400 block of East Boulevard in Johnston City, to the school district Thursday afternoon. The theater was purchased by the late Robert Cluster in the 1920s. Cluster constructed the gingerbread exterior and wings inside the building, according to K. Neil Thurmond, former Johnston City mayor and now postmaster. Thurmond said Cluster “dressed it up and made a theater out of it.”

Thurmond said Cluster featured such figures as Tom Mix and Tex Ritter in stage shows. He called it the outstanding showhouse of the area. The Palace Theater was the site of the first showing of a talking picture in Southern Illinois in 1927. The movie, “The Jazz Singer” starring Al Jolson, ran for three weeks.

The Cluster Circuit was located at 119 South Broadway .Salem,Ill.with loren and Stewart Cluster Co-Managers in 1956.

Most likely in one of Salem’s Downtown theatres,Globe,Lyric or Salem Theatres where the homeoffices located.

Unfortunately as you know this theater was DONATED to the Johnston City School District on November 9, 1971, which many saw as a positive opportunity. However unfortunate, for those that may not be aware that the following timeline of events took place for the next decade in Johnston City, that not only affected the school district but all tax-payers within it and the city itself. Just over 45 days after the theater was donated to the school district, on December 30,1971, the school district was amassed a detrimental and tragic blow to the community when the Washington School began to sink do to mine subsidence which left nearly 500 students to be educated in churches, broom closets, and outhouse buildings in a frenzy. This building just 30 years old, was deemed condemned by the state of Illinois which led to an urgency to build a new building which was not started with construction until January 18, 1974, three years later………After considerable site testings and approved for a safe construction site this new 750 student school was started and when it was over 85 PERCENT built and nearly completed, this building YET AGAIN was deemed condemned due to the mine subsidence in 1976! So here we now have 5 years of additional costs for the school district through legal counsel against the mines, the new contractor and site inspector and nearly 8 years later and still no school to house the 500 plus students who were displaced from not having a school to attend but bused from numerous churches in town and then bused to the remaining schools at lunch time and back then to the respected classrooms throughout the city. What a financial nightmare, and I am sure you all recall the your tax bills in the 1970 and 1980s as a result of one school deemed unsafe, then 85 percent of monies spent that had been approved by the voters for a replacement school to then now have one school deemed condemned, one school nearly completed being condemned and still no school! So here we go again. more taxes straining our parents and all families…….voters once again approve to spend more money, raising their taxes even higher in order to build a third and final building on yet another entire site that led to more costs…..Not to mention the interest rates in the late 1970’s with no restitution from insurance companies, the coal mines, nor the first contractor and site inspector……so then finally in late 1977, construction began on the present Junior High and Grade School. This school was not completed until the Fall of 1980-1981 school year. So sad for sure, however it should be a lesson for any city or school district or for anyone, that if someone is donating you something, you best be in it for one hell of a ride! So, yes the building is gone, and recollect it vividly from a few school performances that I observed as a child, but understand now completely, what my grandparents always meant by the saying…“you cannot get blood out of turnip!” meaning the people of Johnston City had given of their blood to save their school district and I can proudly say from afar, that they proved perseverance to its finest! To think, today if we had this opportunity the 1 percent county wide sales tax dedicated for the soul purpose of our county school districts facility maintenance is the best thing that has ever happened. As each and EVERY school district and many outside of the county have been able to remove facility maintenance from their general funds and have been able to build and update each and every school and replace many that should have been condemned due to age itself…So yes sad, but sure makes me glad for the education I garnered through the JC School District that was the foundation of my career and future.