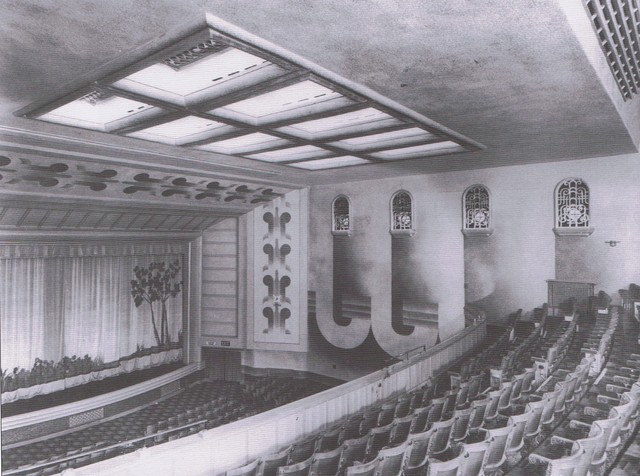 Built for and operated by Sydney W. Clift’s small independent Clifton Cinemas circuit, the Clifton Cinema in the north Birmingham suburb of Great Barr, (sometimes known as the Clifton Cinema, Perry Barr), was opened on 21st February 1938 with Richard Dix in “The Devil Is Driving” and Hazel Ascot in “Talking Feet”.

Set back from the busy Walsall Road at the corner of Tower Hill, the Clifton Cinema is an imposing building. The facade was brick, and had two rounded bays, with a recessed central section containing the entrance. Inside the auditorium, seating was provided in stalls and circle.

The Clifton Cinema closed on 10th November 1979 with "Lord of the Rings"(Animated version) and "Beyond Waikiki". It was converted into a bingo club, which continued as a Gala Bingo Club until closing in June 2008. It was converted into a Chinese restaurant, but this closed by 2011. In late-2011, there was proposals to convert the building into a banquet hall.

Tragedy struck in the early hours of 6th January 2012, when arsonists broke into the rear of the building setting it alight. It was over an hour before the fire was noticed and the fire brigade called to the scene. It took 2 hours to bring the blaze under control, and the former cinema was badly damaged.

The Clifton Cinema is a Grade II Listed building.

Anyone know the cinema where they played bingo in the film ‘Once Upon A Time In The Midlands’!

Report of a fire

SIR.. Sydney W. Clift and Satchwell & Roberts must be turning in their graves.. This was their masterpeice..

Have found an exterior view from better times

I spent many happy hours here and at the other local cinema The Beacon, as I lived in Stamford Avenue which is nicely in-between these wonderful places, Kids club at both and strongest memory seeing The Dam Busters and my aunt Ida cheering as the dams burst.

Re Once Upon a Time in the Midlands, although the exterior shot in the film is of the former Capitol cinema in Radford, Nottingham, the interior bingo scene shots were filmed at the former Byron cinema in Hucknall, Nottinghamshire. Both buildings still exist, but neither is in use as a cinema at the time of writing.