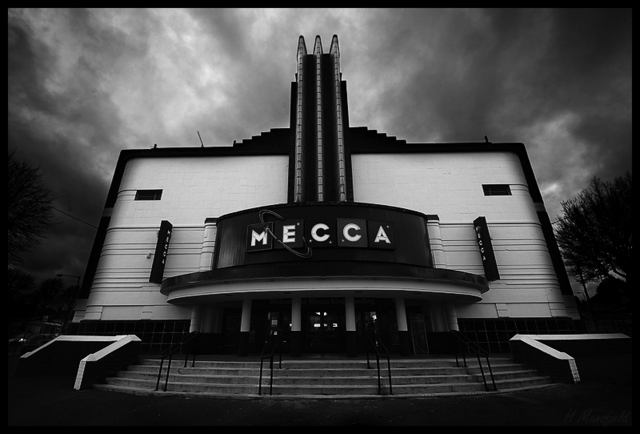 Located in Kingstanding, a district near Sutton Coldfield to the north of Birmingham, the Odeon stands on a prominent site at the intersection of several roads. Originally this was planned to be an independent cinema, to be known as the Beacon Cinema. Oscar Deutsch got involved during its construction and it opened as one of his original Odeon Theatres Ltd. chain.

The Odeon opened on 22nd July 1935 with Gary Cooper in "Lives of a Bengal Lancer". The exterior of the building is considered to be a quintessential Art Deco ‘Odeon’ style. There are rounded corners a central bay which is covered with cream faiance tiles and a slender vertical fin-tower, which originally had letters on top, horizontally spelling out ‘CINEMA’.

After viewing the magnificent exterior, the inside of the building is little bit of a let down. Seating was provided in a semi-stadium plan, with the circle having virtually no overhang to the stalls. There were 968 seats in the stalls and 324 in the circle. The ceiling had square Art Deco style light fittings, but was otherwise plain, as were the side-walls apart from a few decorative grilles.

The Odeon closed on 1st December 1962 with the 1955 film; Audie Murphy in "To Hell and Back". It was converted into a Top Rank Bingo Club, which today is a Mecca Bingo Club.

Interior and exterior photos after the 2009 refurbishment of the Mecca Bingo Hall:–

Correction of Myth.. The Theatre Opened under Clifton Control “The Beacon Cinema (Kingstanding) Ltd., The Sidney Clift Faction controlled the Majority of Shares. Oscar Deutsch only had £100 in Shares, so had no say.. The same with "The Warley” From my memory as my family and I had interests in a number of Theatres and Cinemas.. It did not become a full Odeon untill around 1941 when J. Arthur Rank took over Oscar Deutsch’s interests although they where badged as Odeons before this date. Hope this makes it clear..

Referring to my previous comments. On further research. The Theatre along with Odeon Warley.. Stafford.. Shirley. Kettering.. Hereford.. and another one, Which is possibly the built Odeon Bradford Where controlled by the Clifton Syndicate (share wise all except the 200 shares in each site J. Arthur Rank had purchased off the Deutsch Family ). until Rank – Odeon did a Share rites issue in December 1947 to buy up anomalies like these theatres. Most Built Odeon’s had a Clifton Syndicate holding of a lesser degree. Hmm So we ended up buying shares in the Odeon Properties Ltd., So they could by us out of these odd companies..