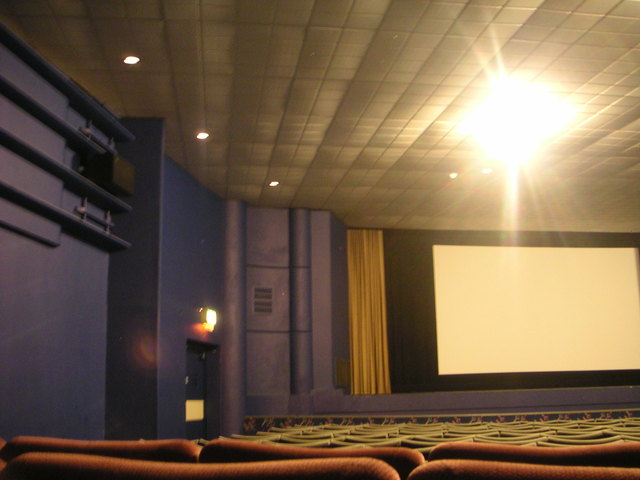 The Odeon was built for and operated by Oscar Deutsch’s Odeon Theatres’s Ltd. chain, the 42nd to be built for the circuit. It was designed by Harry Weedon assisted by architect J. Cecil Clavering of the Harry Weeden Partnership.

It opened on 18th April 1936 with Jessie Matthews in “First a Girl”. The cinema is located just outside the town centre on a prominent corner position of the main Birmingham Road at Maney Corner and Holland Road, Maney.

Considered to be one of the best designed Odeon Theatre’s (Odeon Harrogate is an almost exact copy), the low corner entrance is dominated by a high ‘fin’ tower on the left which originally had the word ‘Cinema’ on top. Inside the auditorium seating was provided for 1,600; 1,028 in the stalls and 572 in the balcony. A sleek Art Deco style of decoration was within the auditorium that was illuminated by concealed lighting set into troughs across the ceiling.

It was one of the first of the original Odeon’s to be tripled and became a three-screen cinema from 9th April 1972. The balcony was kept intact with a seating capacity slight increased to 591, while two mini cinemas were created in the rear stalls under the balcony which each seated 132. In 1987 a fourth screen seating 330 was added in the former front stalls area.

The Odeon Sutton Coldfield was one of several Odeons taken over by the Irish-based Ward-Anderson Cinemas in March 2006. Trading under the Empire Cinemas name, it has been renamed the Empire Cinema. Seating capacities in the screens are now; 1. 592, 2. 135, 3. 100 and 4. 329. It was closed in March 2020 due to the Covid-19 pandemic. In September 2021 the operators Empire Cinemas announced that it would remain closed for at least another 9-months while funds were obtained to carry out a refurbishment.

On 18th November 1998, the then Odeon Cinema was designated a Grade II Listed building.

A Summer 1971 view of the Odeon Sutton Coldfield:
View link

Photos – inside and out – of the Empire Sutton Coldfield here (taken October 2009):–

Some great photos from April 1936 of this cinema inside and out at the National Archives here:

The first Odeon to be tripled was Glasgow, an expensive rebuild. Sutton Coldfield was the first of the much cheaper “drop wall” triplings which Rank applied to over fifty cinemas in the following three years.

Firstly. John Cecil Clavering designed the whole thing. he with Roland Satchwell created Odeon look.. There is no evidence that Weedon designed a whole cinema.. Prior to the Odeon work he was assistant architect at the Harold Seymour Scott practice. Cleaving transferred from the Satchwell & Roberts co., (they were a larger Practice) to become Head architect . 16 cinemas Later Bullivant took his place. Weedon did prepare the budgets for the eighth cinema onwards in the Odeon Chain.

Secondly.. Ambak is correct.. It was designed in a morning. The Rank engineer Mr Poole and Morgonites technical Rep Les Castree along with a Bell and Howell 631 16mm Projector a step ladder. tape measure and chalk Les Castree did rough drawings, which Ranks Architects converted to proper drawings. The big mistake Rank did was not getting Modernisation Ltd., to do the job. So you could here 3 films at once It was a Moore Bird Job.. Noted for sound breakthrough..