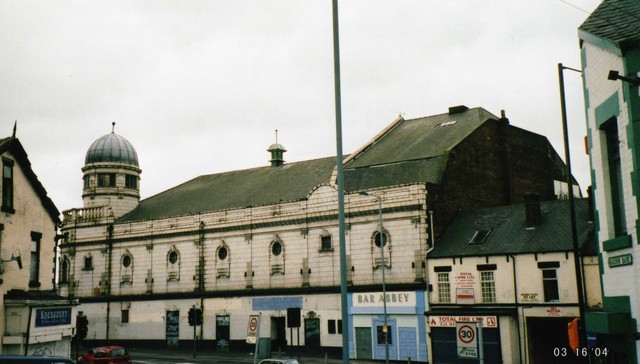 Located in the Nether Edge district in the south of Sheffield. Designed by the architectural firm Dixon & Stienlet of North Shields, the Abbeydale Picture House is an excellent example of a 1920’s cinema. The exterior is clad in white faïence tiles and the corner entrance is dominated by a large open dome tower, surrounded by a balustrade. Inside the auditorium the seating was arranged in stalls and circle levels, with the circle gradually extending along the side-walls towards the proscenium opening. On each side of the proscenium are Doric pillars and above it is a panel containing Greek figures on a pale blue background. The lower side walls contained panels containing painted scenes. There was a café located above the entrance for the convenience of patrons.

The Abbeydale Picture House opened on 20th December 1920 with Victor McLaglen in “The Call of the Road”. In 1921 a 2Manual ‘Clavorchester’ organ was installed, manufactured by the Sheffield firm of Brindley and Foster. In September 1921 a large ballroom located in the basement opened to the public and in the same part of the building a billiard hall opened, adding to the entertainment facilities.

In December 1928 a new stage and dressing rooms were added, this was to enable the staging of cine-variety shows, but when ‘talkies’ arrived at the Abbeydale on 10th March 1930 (Janet Gaynor in "Sunny Side Up"), the stage use was abandoned.

The Abbeydale Picture House was taken over by the Leeds based Star Cinemas Ltd. in the 1955 and was advertised as the Abbeydale Cinema. It was closed on 5th July 1975 with Charles Bronson in "Breakout" and Perry King in "Lords of Flatbush".

The building was taken over by A. & F. Drake Office Furnishers as a furniture showroom and warehouse. They ceased trading in 1991 and the main auditorium of the building had remained empty and and unused until early-2006 when a community group took it over and began using it as a performance space. They have erected a small fore-stage in the front stalls. In 2015, it began screening occasional film shows. At Halloween 2015 a 35mm print of the German 1922 silent classic “Nosferatu” was so successful that a second screening was held. The billiard hall is still in use as a snooker hall and there is a bar operating from the former stage part of the building. The former ballroom has become a nightclub, but the cafe area remains unused.

In 1989, the Abbeydale Picture House was designated a Grade II Listed building by English Heritage.

A recent view of the auditorium, taken after a performance organised by the community group running the Abbeydale Picture House. There is obviously a long way to go on any possible restoration, but at least the building has re-opened after being shuttered for 15 years:
http://flickr.com/photos/evissa/187245864/

Closed 2018. the Google Street view in 2019 says “we are crowdfunding” and the website’s domain is up for sale.