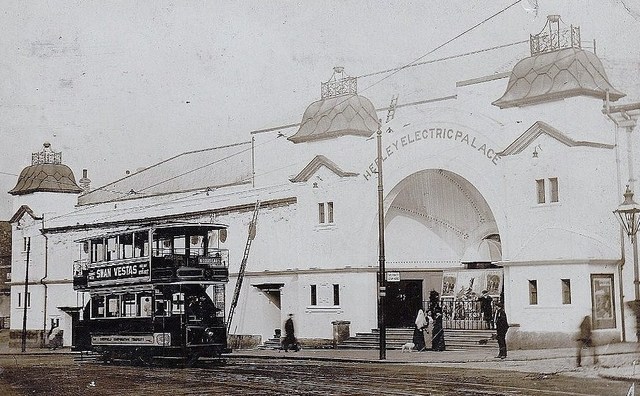 Opened as the Heeley Electric Palace on Monday 7th August 1911. It stood in London Road at the junction of Oak Street. The architect was A.E. King and it was constructed by the Sheffield building firm of George Longden & Son Ltd.

The building was of brick with a white cement stucco facade in the late Renaissance style. Above an arched entrance way was the name ‘Heeley Electric Palace’ in gold letterings. Two turrets adorned either side of the archway with a third turret on the left hand corner of the building. The entrance foyer housed the paybox and led off to a waiting lounge that was decorated by one of the large Sheffield department stores, John Walsh Ltd., which stood in the High Street. Stairs also led up to the balcony. The auditorium seated 1,450 with 1,100 in the stalls, 350 in the balcony and three private boxes seating 6. A further five boxes were added in 1913. Seating was in blue velvet with gold fittings. Carpets, linoleum and drapes were also in blue. The walls, ceilings and balcony front were decorated with ornamental plasterwork and there were also embosssed plaster figures on the walls. Blue again was the predominant colour. The proscenium had a frame of pilasters supporting a lunette featuring the Prince Of Wales crest as a centrepiece. In 1917 an organ was installed constructed by Brindley & Foster of Sheffield. The console had to be later enclosed in a steel tank like structure due to the orchestra pit being liable to flooding.

The Heeley Palace Cinema converted to sound in March 1930 with its first talkie film “Broadway Melody” shown on 31st March using the Western Electric sound system. The original owners were the Heeley Electric Palace Ltd. which in 1920 became Heeley & Amalgamated Cinemas Ltd. They in turn were absorbed into the Leeds based Star Cinema Group in 1955.

When Star took over in 1955, they closed the Palace for modernisation, reseating the cinema and installing the latest ‘Westrex’ sound system and introduced Sunday opening and Saturday Childrens Matinees. The Heeley Palace Cinema first closed as a cinema on Saturday 6th March 1963 to become a Star Bingo Club – (Sheffield had many former cinemas as Star Bingo Clubs) but films returned on a part time basis with bingo on 28th February 1965. By this time the cinema looked very grubby and had no tabs to the screen. The film shows were short lived though and full time bingo returned on 22nd June 1965 with the last films shown being the double-bill ‘X’ certificate programme “Camp On Blood Island” and “The Revenge Of Frankenstein”.

Bingo itself came to an end and after a short time as a Skateboard Centre the cinema was used as a furniture showroom. When they moved out it stood empty for several years being finally demolished in 1981.