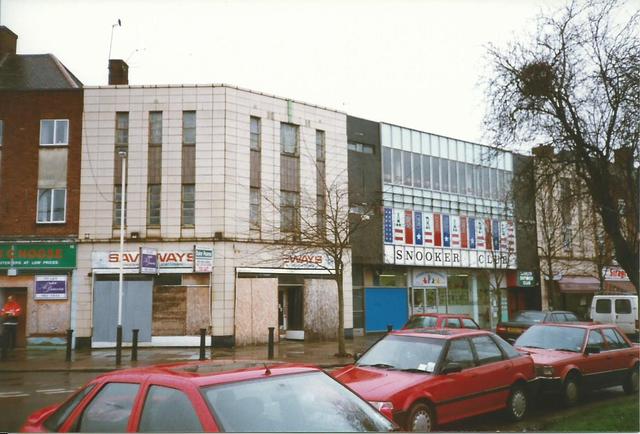 Located in Sudbury Town, a district near to Greenford, Middlesex, on the outer west side of Greater London. The area was named Sudbury Heights and the cinema was located on the corner of Allendale Road and Sudbury Heights Road. This was one of the original Odeon Theatre’s built for Oscar Deutsch’s Odeon Theatres Ltd. chain. The Odeon Sudbury Town opened on 16th September 1935 with Wallace Beery in "The Mighty Barnum".

The cinema façade had a cream faience tiles and was recessed above the canopy and entrance. There is a parade of shop units on both sides of the entrance, again with cream faience tiles. Inside the auditorium, seating was provided on a stadium plan, with a raised section at the rear. The stalls seated 730 and raised tiered circle section seated 279. There were long deep troughs in the auditorium ceiling which contained concealed lighting.

It soon became known and advertised as the Odeon Sudbury, but it was not a very successful Odeon and was closed on 27th October 1956 with George Baker in "A Hill in Korea" and Kenneth More in "Raising A Riot".

The front entrance/façade of the cinema was re-built, leaving the adjacent shop units untouched. The foyer and auditorium were gutted and it became the Starlite Ballroom & Bingo Club, where bands such as “The Who” and “Pink Floyd” played. In more recent years the bingo has moved out and the ground floor became the Sudbury Town Nursery School, with the Starlite Snooker Club using the upper parts of the building. The screen end of the auditorium was converted into office space known as Sudbury House. The building was unoccupied in 2012, and in late-summer 2014 plans were proposed to demolish and build a block of 39 flats on the site. The auditorium had been demolished by March 2018.