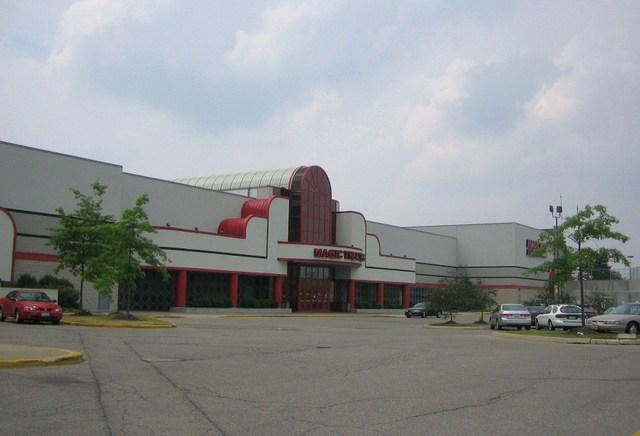 It was closed in April 2008. On May 6, 2016 the lobby and one of the auditoriums in the building were badly damaged in an arson attack.

How do they expect to stay in business when they do not list showtimes in the Plain Dealer or update their website?

I did call the phone number-the phone would ring once, then dead air. Apparently the phone number still works, but their answering machine or voice mail is disconnected. That’s why I assume the theater is closed, and should be listed as such. The website still lists showtimes no later than 11/4/08. And with Sears soon closing at Randall Park Mall, the whole mall is pretty much dead, except for the businesses on the outlots along Northfield Road.

The website link is now shut down, so this theater should now be listed as “closed”.

A picture of this now closed theater as of 2011: View link

On fire as of 20 minutes ago according to the below link.

According to WOIO Ch.19 news just now, the abandoned Magic Johnson Theatre is on fire, video shows smoke pouring out of the roof. No cause has been determined. The theatre has been closed for several years, and is now a free-standing building as the mall has been demolished. Some of the other abandoned anchor buildings (former Hornes, Macy*s, Sears, JCPenney) also remain, but there is no mall connecting them together.

Update: WCPN-FM 90.3 is reporting the fire started in the concession area/main lobby and spread to one of the auditoriums. No word if it was arson or not.

News reports say it was an arsonist.