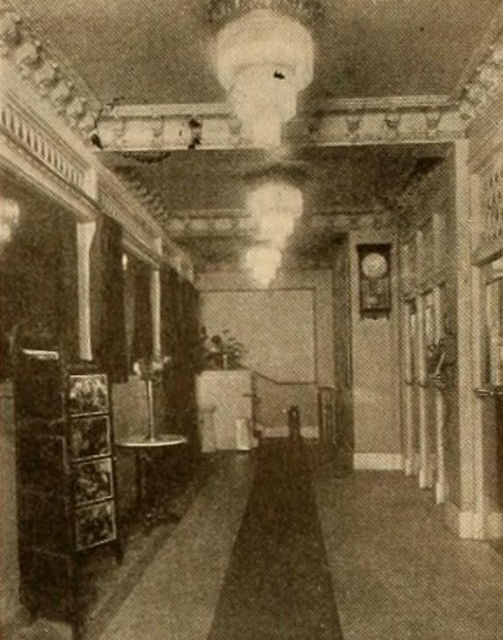 This ad was in the Indiana Magazine of History. The article was about the Klan in Indiana in the twenties. I didn’t see another American theater listed in Indiana.
http://tinyurl.com/6rjcdj

If you look a half block down on the right you can see the American Theater. It’s blade can be seen with the theater building being set back. Tony Hulman housed some of his collection of cars in the building after it closed and called it The Early Wheels Museum. Yes the building is gone. http://images.indianahistory.org/cdm4/item_viewer.php?CISOROOT=/P0129&CISOPTR=1480&CISOBOX=1&REC=3

Here is information about the American Theatre from the March 25, 1916, issue of The Moving Picture World:

“The American Theater, owned and manager by Morris Less, also owner and manager of the Lyric Film Supply, is Terre Haute’s best in moving picture theaters.

“As will be seen by the views, the American is the real thing. It seats 1,050, has a pipe organ, an operating room 10 x 18 x 8, having an 18-lnch vent flue. There are two Simplex projectors. Over the lobby Is the Lyric Film Supply, where projectors of various kinds are carried, as well as a full line of supplies, and a rather weird collection of projectors of ancient and venerable aspect and design.

“The American Theater has a light plant which Is a real curiosity. Brother Less just simply don’t propose to have his theater go dark. He has a 60-h. p. kerosene engine and a 120-volt generator of 260 ampere capacity, a motor and another generator of like capacity to rectify the A. C. in event the engine gets balky, and still another motor and generator of smaller capacity to carry the load when it is light

“The seating consists of a bank of seats in front, then a bank of brass-railed loge boxes, behind which is a second bank of seats. There is also a narrow balcony at either side and the rear, all given over to loge boxes. The lighting is by handsome, inverted fixtures.

“Projection is very good, though I believe it might with advantage be more brilliant.

“Mr. Less is a wide awake exhibitor, as well as an affable gentleman, with whom one likes to talk and exchange views. May his tribe increase.”

The American Theatre was in the planning stage in late 1913. Here is an item from the September 13, 1913, issue of The American Contractor:

There was some delay in construction, though, and the project was still underway in 1914, when the October 31 issue of the Terre Haute Saturday Spectator reported the architect saying that, when completed, the American Theatre would be as near fireproof as possible, and that its floor was a single block of concrete formed in one continuous pour. Architect Rodney W. Leonard also designed the West Theatre in West Terre Haute in 1916.

Found this link to the Early Wheels Museum: http://www.brisray.com/th/tpcards102.htm It includes this note: One of the largest Antique and Vintage Auto Collections in the world is located in the “Early Wheels Museum” on Wabash Avenue in Terre Haute, Indiana.

The Early Wheels Museum was located on Wabash Avenue, but was totally destroyed by fire in the mid 1980’s. Fortunately, prior to the fire, several trains and cars kept there had been moved to Indianapolis.

The American was renamed the State before it became the Early Wheels Museum. (from If you grew up in Terre Haute FB page)

The name change from American Theatre to State Theatre took place around the middle of 1949. The Terre Haute Tribune ran an ad for the American on June 27, 1949, but was running an ad for the State by July 10 of that year. The state was in operation at least as late as July of 1955. As the State the house showed a lot of westerns, adventure films, and comedies.