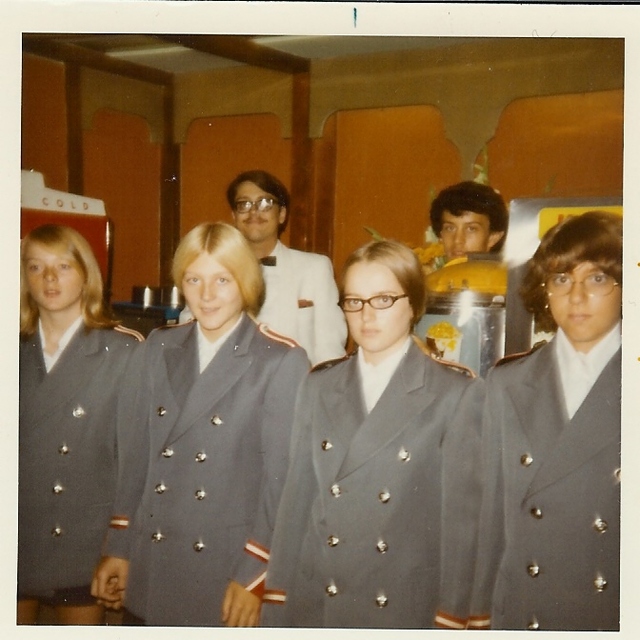 The Capitol Theatre was originally built circa 1933 by the Comerford Theaters Inc. chain. Throughout the 1930’s, 1940’s and 1950’s, Comerford opened a medium sized chain of indoor and drive-in venues. Comerford was well respected by their piers and patrons alike for constructing fairly ornate, well-built facilities even in smaller towns like the 10,000 population Milton, PA.

(Note: Milton was the original home of Chef Boy-ar-dee Foods. Yes, there really was a Chef Boiardi who lived on Boiardi Lane.)

By the late-1960’s and early-1970’s the chain had dwindled to a mere shadow of its former glory. The paint on the marquee was peeling and only a few bulbs burned. It had been a long while since a paint brush had been put to good use. Jack Oberleitner, rising young star of the Pittsburgh based Associated Theatres, pooled his talents and money with Thomas Poling of Piqua, Ohio, Jack Hogan, noted central Pennsylvania projectionist, and others forming the Cinestage Group, Inc. The Cinestage Group search through as much information as possible in an attempt to restore the Capitol Theatre to its original 1933 splendor.

The Capitol Theatre was closed for two months while Cinestage, and some loyal volunteers repaired, painted, bulbed re-wired, and polished the Capitol Theatre from box office to the front draperies. They latterly ate, slept and worked in the theatre. The opening attraction was the original 1933 version of “King Kong” and classic short subjects featuring Shirley Temple, W.C. Fields and Laurel and Hardy. Ushers and other staff members looked sharp in vintage, military style uniforms. Once again the Capitol Theatre marquee twinkled and glowed as it had four decades earlier.

While Oberleitner and the town Mayor prepared to cut the ribbon made of 35mm film, others inside were still taking down scaffolding and making last minute alterations. Outside, a line of eager “first-niters” stretched out for several blocks.

Wide-eyed patrons entered to the sound of organ music, the smell of fresh popcorn and the smiling ushers standing at attention. All ladies received an orchid corsage, and free coffee was available in the mezzanine lobby which was quite resplendent with gold fabric couches and chandeliers that had been rescued from the Capitol Thetare basement. The 350 seat balcony and 850 seat main floor seating filled to capacity in quick order. Hundreds were turned away with promises of a repeat performance the following day. As the lights dimmed and curtain opened, the first short popped on the screen. The entire audience cheered and clapped. On that special evening, August 6, 1972, some magic happened and for three hours, the glory days of the movies lived again.

The Cinestage Group ran both current and classic films, locally produced stage events and occasional road company musicals. Eventually Cinestage operated four theatres and one drive-in before selling out to William Cloninger and others. Two years after the grand re-opening, an historic flood raged through the town. Under the creative expertise of Tom Poling, once again the theatre came back fighting.

After selling to Cloninger, Oberleitner went on to form the Altoona-based Holiday Entertainment company with Louis P. Silverman. He also became fairly well known as a theatre historian and contributed to the saving and refurbishing of several theatres. Poling left the business, Hogan continued as a projectionist. About a year later the Capitol Theatre burned to the ground from an electrical problem. Cloninger valiantly kept the chain alive for several years thereafter.

Sorry John, I really don’t know. I’ve not been involved with day-to-day operations for several years. Louis P. Silverman is in charge of operations on the corporate level.

Jack, I was in Milton on Sunday evening. Milton now has a walking tour of the town. Its a one mile tour with 14 sites. Each stop features photo/literature kiosks. The Capitol site features a lengthy write on the Capitol as well as some neat pictures. Pictures that are included are the one of the Agnes flood, the fire and the Dec.21st 1963 picture of the auditorium filled with kids waiting for Santa to appear.

I was raised in Milton, and the Capitol was an important part of my youth. Yes, I was one of those standing in line for that showing of King Kong!

The Capitol wasn’t just a “box with a screen”. It was a class act, from the front doors to the upstairs lobby to the gracefully sweeping ramps that led down from the balcony to the exits near the organ pipes.

The theatre did not “burn to the ground”. However, it was declared to be “structurally unsound” after the fire. But, as anyone who was there watching the day they tore it down remembers, when they swung the wrecking ball at it, the theatre didn’t budge! The onlookers cheered! And my memories of the Capitol are as sturdy as that theatre was. From the soda machine decorated with an odd-looking fellow named Mr. Dee-Lish came the best cherry soda 15 cents could buy. Every few rows was a double seat, to accomodate either affectionate couples or the backsides of patrons who’d made too many trips to the snack bar for Junior Mints. You could “hoot the boxes”, too!.

In addition to the balcony, there was also a loge, which was basically a balcony in the balcony. Since they chaged extra to sit there, I never did. I remember two films in particular. Silent Running, which was the film showing during the 1972 flood, and Electra Glide in Blue, which was showing when it burned. I was in school, science class, Mr. Gates, when the word came in that the Capitol was on fire. Funny how we remember the day the celluloid died. My dad was fire chief at the time, and he brought home letters from the marquee as souveniers.

The building might be long gone, but the Capitol lives on in the minds of every Miltonian.

Oh, I believe the date is wrong in the write-up. It says: “On that special evening, August 6, 1972, some magic happened and for three hours, the glory days of the movies lived again.” But that couldn’t be right, because then it says “Two years after the grand re-opening, an historic flood raged through the town.” And the flood was in June, 1972, so the correct date must have been August 6, 1970.

A mural is planned which depicts the Capitol theatre and it’s restoration and reopening in 1972. Picture and story at:
View link

There is some talk of a celebration scheduled for this summer at the park that is now on the site of the theatre. The event will include a reenactment of the original gala reopening.

The Capitol mural is completed, along with several other “works in progress” on walls in Milton, PA

The following three links are articles in the Sunbury Daily Item about the artist, The Cinestage Group, and the impact of the murals (and the Capitol) on the area.

The commemorative celebration honoring the 1972 re-opening is now scheduled for 2011.

“BECKET” was a major motion picture to play here.They ran a 2 pm matinee and an evening 8 pm show.This on Feb.6 1965.Today, another showing would have been squezzed in somehow.