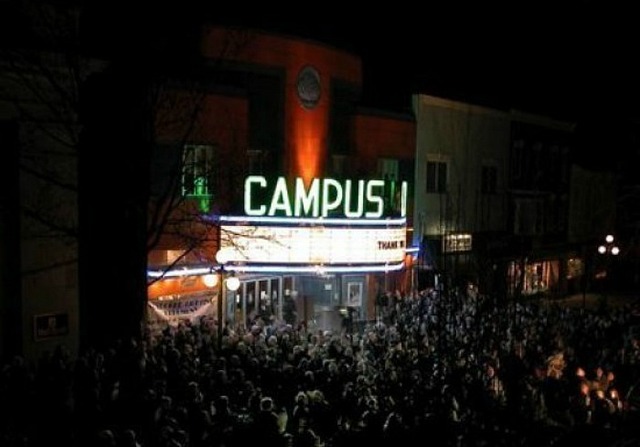 The Campus Theatre opened January 17, 1941, with 717 seats and the movie “Love Thy Neighbor” starring Jack Benny and Fred Allen, with prices of 10/15 cents for children, 25/35 cents for adults, plus 3 cents for defense tax.

The Campus Theatre was designed by Philadelphia theatre architect David Supowitz, in the Art Deco style. Bucknell University colors orange and blue were used on the exterior and inside. The façade is an orange glazed terra cotta. The marquee has giant chrome and green neon letters. The blue bison relief on the exterior front wall and the stainless steel blue and silver images of athletes embedded into the interior lobby doors relate to the local Bucknell University spirit. The Campus Theatre opened with modern features: a chrome turnstile and seats that automatically raise when not occupied.

Inside, Art Deco style extends from its mirrored lobby and lounge furnishings to the wall and ceiling murals and light fixtures. The auditorium ceiling is painted with a wave pattern and abstracted floral designs influenced by machine geometry. Two twelve-foot high murals, male and female figures rendered in shades of blue, orange, crimson, and silver, adorn the auditorium side walls. In the rear, beige, blue, and yellow chevron and circular motifs are set on cork wall tiles. The overall effect is regional American modern.

The Campus Theatre was owned and operated by the Stiefel Brother Roxy Theater Circuit until 2001. It was then sold to Bucknell University film professor Eric Faden. In 2011, a $2.5 million six month refurbishment occurred, restoring and updating the entire interior of the theatre. The theatre continues to show first-run independent, art, and foreign films today. The theatre has also hosted two film festivals - one sponsored by the Library of Congress, the other sponsored by the French Cultural Emissary.

Lost Memory….The picture you provided is one before the marquee was renovated. It has been updated with energy efficent lighting. If you want to see an even more beautiful marquee, go to the Campus website and check out the pictures. An outstanding job was done. Thanks for that picture..Now if you can come across a picture of the HILL theater in Camp Hill Pa. That is one I would love to see.

Lost Momory…that is the new marquee you linked on the 28th Dec. 2007. Looks great in person. I have tried to find a picture of the Hill, but no luck. I thought if anyone could find one it would be you.

Eric Faden sold the Campus Theatre and it is now being run as a non profit institution with a community-based board of directors.

The Campus was selected as one of 52 movie houses in the nation to host an official “Oscar Night America” party sanctioned by the Academy of Motion Picture Arts and Sciences. The party was a fund raising event for continued preservation of the theatre. The party feature a live “red-carpet” video feed into the theatre and limo service to the front of the theatre.

what an absolutely beautiful theatre, both inside and out! the marquee and rest of the exterior are especially amazing.

Here is an undated photo:
http://tinyurl.com/plzso4

Looks Like A Mike Rogers' Marquee.Great picture of a Grand Theatre.Thanks for the 1982 pictures.

There is a video online that deals with the on going renovation of the Campus. It is on the homepage of the Daily Item; Sunbury'PA’s daily newspaper

Couldn’t find the video on the link above but I did find one here: http://www.wnep.com/wnep-union-theatre-campus-bucknell-university-renovations,0,6908307.story

Not much of a grand opening ad posted in the photo section.