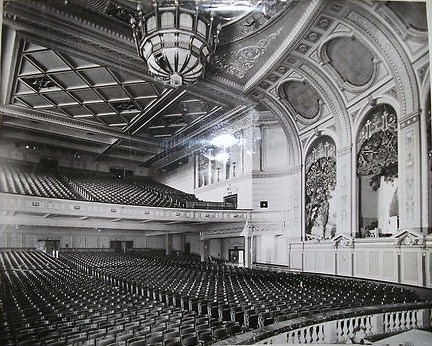 Located in the west London district of Hammersmith, the Commodore Cinema lay some distance away from the main shopping centre on King Street at Young’s Corner, Stamford Brook. The foundation stone for the building was laid on 1st January 1929 by Tallulah Bankhead. The magnificent Commodore Cinema opened 14th September 1929 with Laura La Plante in “Showboat”. It was built for and operated by an independent operator Commodore National Theatres Ltd. which was controled by millionaire Ralph Specterman.

This vast cinema was designed for cine-variety and for the first few years that was the programming. Seating was provided in stalls and circle and there was provision for 252 standing spaces within the auditorium. It was equipped with a Dutch manufactured 3Manual/10Rank Standaart cinema organ, which was opened by Harry Davidson. There was also a large orchestra employed and the stage was 28 feet deep, the proscenium was 50 feet wide and there were eight dressing rooms. Other facilities in the building were a cafe and a dancehall.

Associated British Cinemas(ABC) took over from 24 July 1933 and within months the huge stage shows had been dropped and the orchestra disbanded. It continued as a films only cinema until it was closed on 8 June 1963 with Juliet Mills in “Nurse on Wheels” and Yoko Tani in “First Spaceship on Venus”(Der Schweigende Stern). From 14th June 1963, it was converted into a Mecca Bingo Club and this continued until 1981.

The building was immediately demolished in January 1982 and an office block known as Quantas House was built on the site. The original foundation stone of the Commodore Cinema was re-sited at the entrance to the new building.

Despite the fact it was then operating as a Mecca Bingo Club, the Commodore Cinema hosted two concerts by the Rolling Stones pop group on Sunday 10th January 1965.

What a gorgeous cinema. I dream of seeing movies in palaces like this.

At Last I have found a picture of the Commodore.. It is not good.. But there might not be any other around…

The Original General Manager was “Jack Hart” Who previous was general manager of “The Holborn Empire” He Trained the Manager (Frank W. Attoe) Who later trained me in management at the ABC Walsall…

The Organist Harry Davidson later Played the Organ at Our Regal Cinema Henley on Thames..